Tuscany Reserve was this week stripped of all its dignity as each and every team tore it apart with startling ease. Birdies followed birdies, with the occasional eagle thrown in for good measure. Often on tour when a course is soft and the wind non-existent, you may hear the phrase “it’s like throwing darts out there” – well, this was the perfect physical manifestation of that phrase.

With the season just one week old, it appears that most teams are evenly matched, though the highly decorated Beamers do appear to have a couple more gears than the others. With this in mind it was a daunting task for the Sultans of Swing as they squared up to the New Zealanders, having last week missed their tee time due to an unfortunate apparel malfunction.

The underdogs started well as they matched The Beamers birdie and overcame any trepidation that may have been felt in the presence of a full Beamers squad – including backroom staff and medical practitioners. In fact, the medical practitioners were heavily employed by SOS as they received attention for their injuries obtained from the aforementioned pantomime horse incident over the Bank Holiday weekend. Perhaps distracted by the vigorous rubdown they received after the opening birdie, Sultans managed only pars on the 2nd and 3rd holes which were no match for a brace of Beamer birdies.

These proved to be the crucial holes as The Beamers continued to pour in birdie putts from seemingly everywhere. Their formula was simple; the bare-footed Aiden would set them up and the rest of the side would take it in turns to find dead centre of the cup. It’s a great credit to Sultans of Swing that they only lost by 2 clear holes against the sheer brilliance of The Beamers 28 over the nine holes. Sultan’s Graham Harris was far from downbeat at the conclusion of the game, saying “this time 2 weeks ago I was being cut out of a pantomime horse costume, having spent 2 hours with another mans arse in my face after we fell down a flight of stairs. I’m just thankful to both the emergency services and also to The Beamers medical team for getting us back on the course. Fortunately, we get the chance to play them again in a few weeks, and we will be confident that having competed this time that we can give them a scare if we bring our best stuff.” 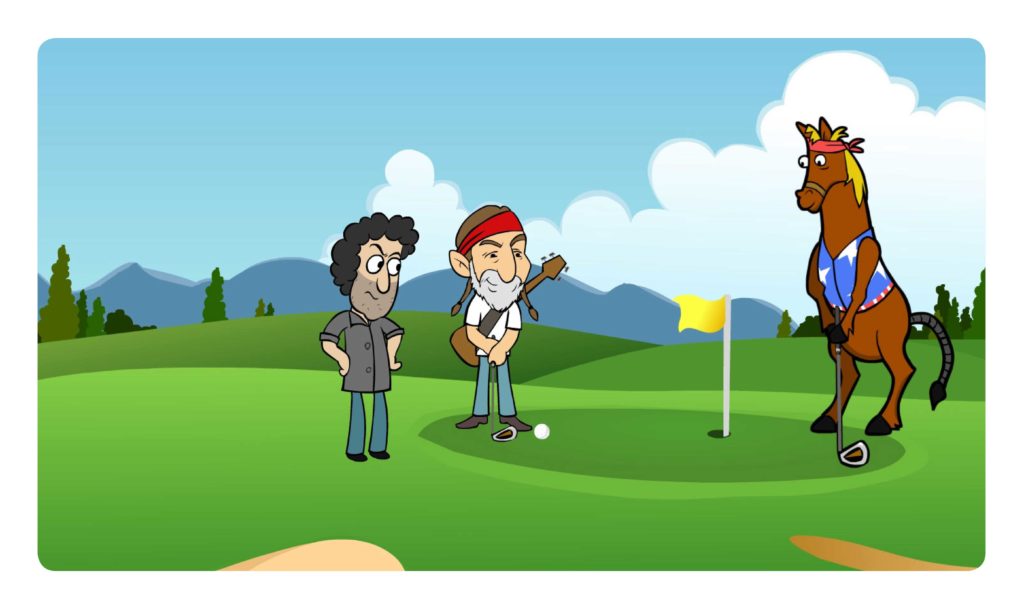 Sultan’s of Swing eye up yet another birdie chance en route to a fine, but ultimately disappointing loss to The Beamers

Away from the love-in that was developing in the neighbouring sim, things were a little feistier between Shaft and WKJ Choi, though the golf was of an equally high standard. Andrew Ogier was at his abrasive best, while Keith Schrod played good cop. Having been to more than one Rodeo, Choi are long enough in the tooth not to lose focus in the midst of any gamesmanship. It was left for the golf to do the talking, and in between multiple pints of premium craft lager, it talked a lot! The chitter chatter of birdie after birdie became almost deafening at times as each birdie was responded to by yet another.

As a sporting contest this was right up there with The Duel in the Sun, The Thriller in Manila and Phillip Price v Phil Mickelson. It was the ultimate slugfest. Fittingly Choi produce one final piece of magic on the final green to claim a deserved half from the match. With the opposition in for par, arguably having considered an opposition birdie an impossibility, Choi faced a stinky downhill left-to-right then right-to-left followed by a further double-swing up and over putt. This was the Team League equivalent of Tiger Woods’ putt on the 17th at Sawgrass (“Better than most”) in 2001. Well, like Tiger, Craig Dallender stepped up an stuck two fingers up to the golfing gods as he went a poured it dead centre into the hole before being mobbed by team mates, fans and a couple of over-exuberant Met police officers.

The final draw ultimately does no team any favours, but as the rights package goes out to tender this week, it will have done a huge amount of good to the Team League brand and its perceived value. Some say that the package may go for a 7-figure sum (two of those before the decimal point). Time will tell on this front, but we can say with absolute certainty that it was a joy to have been a part of history.

Next week The Beamers will be looking to continue their impressive form against Shaft as Choi take on SOS around the devilishly difficult Druid’s Glen.