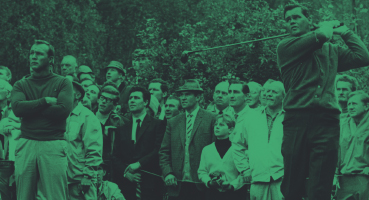 The tightest league since records began entered its penultimate week with four sides level at the top, destined to go right to the wire in round five. It has thus far been the most uncertain of leagues, with the only certainty being the disappearance of the A-Team’s aura of invincibility.

The new found lack of said aura would be put to the test this week as they faced a reinvigorated Stuper Mex team that boasts some serious talent these days as the decorated Glen Oliver has recently been joined by Andrew Slowgier. As expected, this game was an absolute birdie-fest with both sides being 5 under for their first 5 holes. The distinct contrast in styles made this a hugely entertaining contest, as Mex struck the ball long, clean and close, The A Team were hugely efficient and typically ruthless on the greens.

It took a while for any sort of shock, but it came on the 6th green when all 6 players missed for birdie from within 10 feet to record the first half in par. As the tension grew, Slowgier relished rekindling the rivalry with his old adversaries, trying all his old tricks to put them off. It was quite startling when it was actually his own team mate, Glen, who flipped first and quickly put Ogier back in his box with a harsh dressing down that ended along the lines of ;“and that’s why nobody likes you – because you’re not a team player!”

The final three holes were played in an awkward silence following the tiff but the golf on show was making up for the lack of off-course theatrics. All square going down the last, Mex wedged close for the most straight-forward of birdies while A-Team faced a 28 footer for the half. Of course, it may as well have been conceded as there was no doubting the result.

A somewhat petulant Stu commented afterwards that “they aren’t even good. They don’t do anything particularly well, but they always make birdie! I can’t get my head around it.” That’s golf young fella!

With two of the top sides drawing, the door was ajar for the other two contenders to gain the upper hand.

First to take advantage were All About That Jazz, who despite losing their opening game found themselves right in the mix. They had the appetising proposition of taking on I Like Big Putts who are now recognised as the happiest team in all of sports – despite getting a pasting each and every week!

This week would be no different as the writing was on the wall early – especially when it became evident that, in fact, they weren’t so fond of long putts after all, as 3-putts on the opening couple of holes proved. Things got even worse for Putts as they were unable to stem the bleeding, going on to lose the next 3 holes. These were hugely worrying times for Putts as the 9 hole whitewash loomed.

Had the opposition been the ruthless A-Team, the result may have been the dreaded 9 holer, but Jazz settled back, safe in the knowledge that they had done the business and happy to enjoy the company of their opposition over the closing holes. In many ways this was the perfect advert for the Team League. Yes, it can be competitive, but given the choice of zero chat and needless concentration against one of craft beer and good times, The Jazz took the popular option. With spirits running high, Putts managed to claim a couple of late holes to limit the damage and potentially harm Jazz’s hopes of lifting the title next week, but in the words Lewis: “Pah. Let’s have another beer.”

City Swingers were reeling somewhat from their defeat last week that brought into question their title credentials. Any anxiety they felt, would be short-lived as they took on Shanks A Lot and their latest ringer.

The recruitment policy looked a solid one as Shanks upset the odds by taking the opening hole with a birdie. The lead lasted about as long as Boris Becker in a cleaning cupboard, and was quickly reversed by the 3rd hole. Sporting a new ringer of their own, Swingers eased through the gears and reeled off numerous birdies on their way to dominating the game. Though they looked destined for a heavy defeat even early on, the breaking point for Shanks came on the 6th hole when they issued a stern dressing down to their new recruit. The fact that he had not played golf for two years was lost on the team captain who made it abundantly clear that he would not be getting a second cap.

As the deficit increased, so did the level of smugness from Swingers. High fives were soon replaced by chest bumps before “progressing” to some very questionable dabbing. By the end of the match it was hard to tell which of The Shanks players may have actually played any golf in the last two years as they all became incapable of hitting golf shots.

The heavy defeat has propelled Swingers into a near-perfect position to land the title in next week’s final round as Jazz face a daunting fixture against The A-Team.