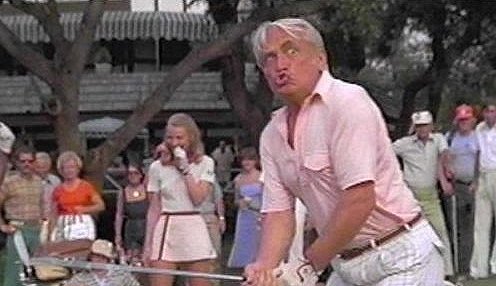 Tony Moss let his disgust show as another long iron shot fails to go in!

They dubbed it the “match of the century.” One esteemed broadcaster described it as being “on the colossal side of gargantuan,” with most saying it was too close to call. The title decider between Stevie’s Wonders and #GCW had everything you’d want from a title decider – intrigue, contrasting philosophies and styles and a hostile edge.

In the build-up Stevie’s Wonders cheerleader and drinks carrier, Clyde Woods, had stoked the fires with his incendiary comments about #GCW’s lack of pedigree and ability to perform at this level. He later added that he thought they should take a sartorial note from Handsome Stu, of Shankers fame, to up their clothing game. The silence from #GCW was noticeable. Either they didn’t care or were too busy searching our videos of golfers with a slower routine than Andrew Ogier.

Whilst the main combatants were preening themselves in their dressing rooms, two our matches of little consequence teed off. In the first of these, Infinity International were out to prove a point against The Course in the absence of their erstwhile captain who was in the process of “breaking a thousand hearts” in New York (she said yes by the way!). Their intention was to give him some encouraging news of their progress on his return. As it turned out, it was very nearly a nightmare result. A couple of late birdies barely saved their blushes as they scrambled to a rather embarrassing half, leaving them praying for the safe return of their captain for the start of next season.

The other dead rubber saw the coming together of two sides in their rookie season, The Knights in Shining Arnold Palmer against Los Severianos. An interesting contest between the well-heeled Knights and everyone’s favourite second team, the cavalier Los Severianos.

The poshest team in Team League history got off to a flyer taking the first couple of holes before the game was turned on its head by a moment of brilliance on the 12th hole. Los Severianos newest recruit, with much to prove, and a swish of his wedge on the 135 yard hole notched up the first Ace of the campaign. Predictably, pandemonium ensued. Following the man-hugs, celebratory drinks and fist bumps, Seve’s children turned the tie in their favour with a barrage of birdies. As it looked like the surge of momentum was unstoppable, The Knights drained a gobbler to send the match all square down the 18th. Having just admitted that he may have thinned his hole-in-one, Seve’s newcomer cemented his hero status by holing a sliding tramliner from 40 feet on the final green for the birdie, the win and no doubt a full time place on the team for next season.

With the drama going on in the so-called dead-rubbers, it could have deflected a bit of the attention from the big title decider. Wanting to soak up the atmosphere and dial into the aura of Druids Glen, Stevie’s Wonders were on the range a full hour early while #GCW preferred the more traditional “turn up late, neck a beer and have one swish before teeing off” approach that has served them so well. For many golfers, the social element of it is perhaps the most appealing attraction, for others it’s win at all costs. This became a clear clash of those cultures.

Tony Moss put on an absolute masterclass of tour disgust as he sprayed 7 irons to an unacceptable distance of 10 feet from the hole, before pouring in the putt and chastising himself for making the birdie such hard work! On the other side of the table we had the gung-ho approach of #GCW chortling each time they boomed a drive over the corner of a dogleg and celebrated with another pint of birdie juice.

In honesty this alarming clash of cultures was not the spectacle we all craved. The serious business of winning was outgunning the grip it, rip it and find it approach. Around a testing course, precision certainly won out as The Wonders haul of 7 birdies was too strong for their opposition. There would be no final hole drama, no need for the holding of nerve. Stevie’s Wonders have simply been untouchable this season. Five wins from five. Stevie will be proud.