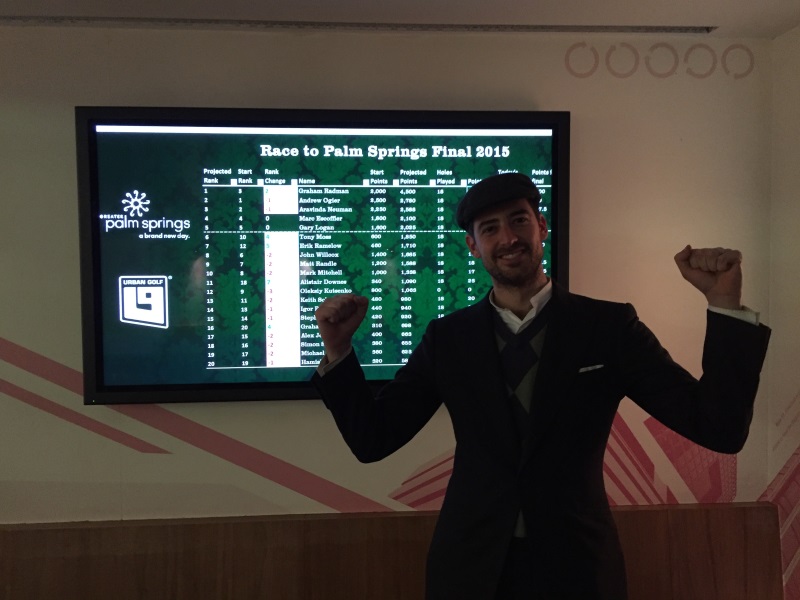 The final of the Race to Palm Springs is quite possibly the hottest ticket in town, with only the most celebrated in society fortunate enough to secure their place among the esteemed onlookers. The likes of David Beckham, Rihanna and Jay Don Blake left to cheer on the arrival of the combatants along Great Pulteney street and the nearby Regent Street.

Such is the pageantry involved in the annual extravaganza that it now takes several hours for the likes of Tony Moss and John Willcox to gain access to the sanctuary of Soho Golf & Country Club. As is traditional, it was perhaps the most entertaining part of the whole evening.

Matt Randle barely escaped with his life, as his clothes were ripped from his back by the legions of screaming teenage girls desperate to make their dreams come true with an embrace from the pin-up boy of Royal Smithfield. Keith Schrod, too, nearly suffered a similar fate and but for his scintillating turn of pace would most likely have suffered a desperate end.

Once inside the mecca of indoor golfing exploits, the combatants limbered up in a variety of ways, with the most serious spending useful time at the bar imbibing Aspall’s. The vast majority of the field certainly seemed relaxed, with perhaps only the leading triumvirate showing any tension.

Though calling what Andrew Ogier was feeling “tension” is akin to saying that the Battle of the Somme was just a minor skirmish. Make no bones about it, Ogier was shaking like a shitting dog. Things did not auger well for the two time champion seeking redemption.

Having driven through the night to make his tee time, big-hitting Alistair Downes started like the proverbial house on fire to make a colossal leap to the top of the rankings. The written media were sharpening their pencils for what would have been the most unbelievable of Cinderella stories. Sadly their pencils were returned to their cases after Downes putting went south, highlighted by the fact that he employed a total of 12 different putting grips and as many as 9 different putters.

Throughout the front 9 there were several attacks on the leaders, with the likes of Matt Randle, Mark Mitchell, Tony Moss and Erik Ramelow taking it in turns to dream big at the top of the rankings. Slowly but surely each one fell away to finish among the rank and file – though it must be noted that both Ramelow returned creditable scores on the night to tie for the familiarity of second place.

With the odds stacked in the favour of the pre-tournament top 5, hopes were high that Gary Logan and Marc Escoffier (THMIG™) would be able to pressure the leaders and test their mettle. Sadly they struggled on the greens and under John Willcox’ careful tutelage learnt the art of the artistic 4 putt.

Resembling the 1928 Grand National, there were big names falling everywhere, and focus was quickly shifted onto the leading 3 contenders. Remarkably, Andrew Ogier struggled to adapt to the confines of the Soho venue, as his usually smooth swing turned into more of a lurch. These were desperate scenes for one of the great characters in the game – fortunately Andrew remained stoic to the end, remarking “I’ve had worse days. I just can’t remember them.”

The other two players in the final 3 ball were obviously in sartorial cahoots in the build-up as Graham Radman rocked up wearing some sensational spats, and Aravinda Neuman sported a pair of slacks last seen in prohibition times.

Uncharacteristically, Neuman seemed to lack his usual spark and really struggled to get the ball into optimum position off the tee, which nullified his usually deadly iron play.

Now down to Radman, the American showed great skill and poise to take the Race to Palm Springs by the scruff of the neck. Marrying power with precision he made the TPC Sawgrass layout look anything but the beast that his fellow competitors were making it look. In all honesty, Radman’s dominance made the back nine of the final a foregone conclusion. Fine shot followed fine shot, and the fact that he won by a clear 7 points on the night was no exaggeration of his dominance.

Clad in an outstanding diamond pullover, flat cap and his spats, Radman cut a fine figure as he successfully negotiated the final few holes in the most efficient manner keeping his ball dry all the way.Able to lap up the adulation down the stretch, the champion took time to wave to his adoring public, pose for photos and sign autographs.

Every bit the model champion, Radman accepted his title with great humility as he thanked every conceivable person including our generous sponsors.

“It has been a lifetime ambition of mine to compete at this level, and playing a round with the great Andrew Ogier would have been enough for me to be honest. I moved over from the states and made a lot of sacrifices just to be a part of Tuesday nights, and this has come a lot quicker than I hoped it might have. I’ve had an awesome time tonight, and am just grateful to have been blessed with the inner calm to perform as I have.”

With his name going up alongside some of the greats, Radman has not only won himself immortality but an incredible trip to Palm Springs where he will no doubt inspire anyone he meets with tales of this victory.

With the season now a wrap, with the Soho Cup to look forward to in January, all we have to say is: Great player. Great guy. Great champion.