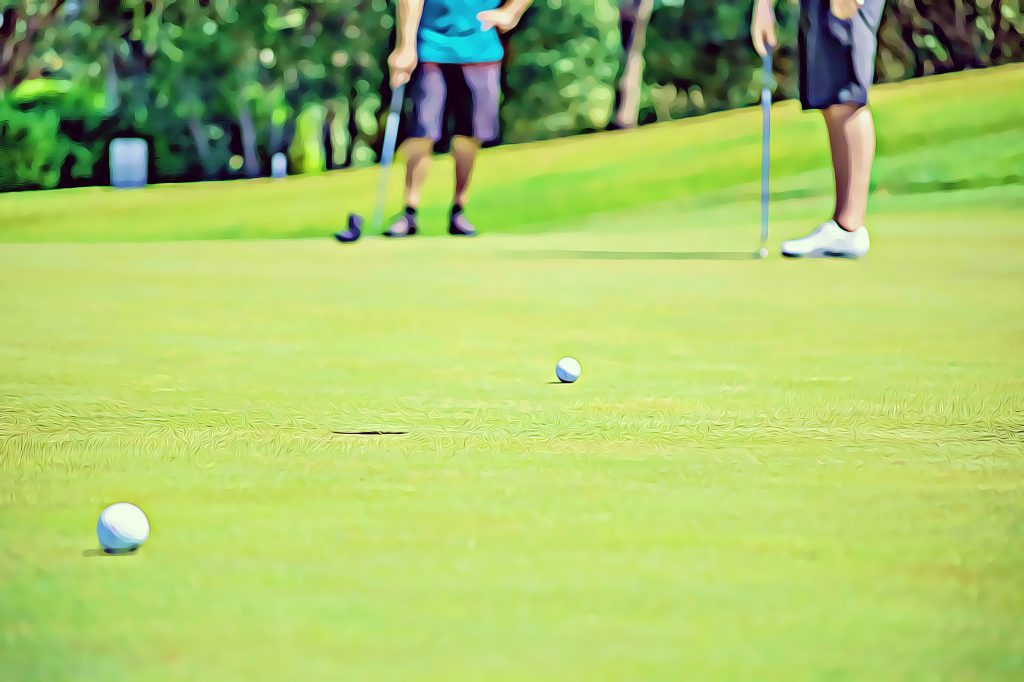 Concessions were rare as McClubface played a tough game

The scenes outside the turnstiles for League 2 were more like an anti-Trump rally as placards were waived furiously and bad chant followed bad chant. In fact it was the craggy supported of Golfy McClubface protesting about the huge injustice brought upon their team. The irony of the laboured mobilisation of the protesters was not lost on the authorities as they found much humour in the placards. Among them “Justice for McClubface”, “In Schrod we trust”, “You can’t handle Matt Randle”, and the inevitable “Wenger Out.”

Once onto the Ocean course, the atmosphere had more of the jovial conviviality that the league is accustomed to. First up, and in no way affected by their fans protests, Golfy McClubface arrived sporting head-to-toe lycra as they promised to speed around the 9 holes in under the 2 hour mark against young upstarts, Mashed Potatoes. With the old boys having reinvented themselves sufficiently to claim the last league title, Mashed Potatoes were certainly up against it.

Clearly the youngsters had skipped the lesson about respecting their elders as they raced into the lead with an opening birdie. Perhaps fired up by the exuberant celebrations across the green, the wily McClubface contrived to produce and eagle on the 2nd to level affairs and silence the youth. The eagle having been ably harvested by Andrew Slowgier who found this to be his lightbulb moment. Always reluctant to modify his deliberate pre-shot, shot and post-shot routine, the discovery that playing less shots actually takes less time could be a huge line in the sand for the league, future opponents and Uber.

With two eagles bagged early, McClubface had enough wind in their sales to build an unassailable lead over Mashed Potatoes. Despite the spuds winning the 16th to test the nerve of the old-timers, the game was closed out on the 17th to extend an impressive winning run by McClubface.

Last season’s newcomers Alan Pitchmarsh and Aspen Amigos renewed their rivalry this week as both sides set out their ambitions to improve on some promising signs from their debut season’s. It was Pitchmarsh who came out the blocks fastest with a brace of birdies over the opening holes. As the Amigos were still getting to grips with their wine order, they got off to a more laboured start and found themselves up against it in what was a well-humoured contest.

Though birdies weren’t flowing too freely, the banter and bonhomie were a real highlight of the contest that was ultimately won by Alan Pitchmarsh whose 2 hole lead was only reduced on the 17th, but maintained at the conclusion of the final hole.

Inevitably, McClubface will be installed as the favourites for the league but the new found confidence of Pitchmarsh and the arrival of Paige Spirinac next week will surely turns heads in week 2.