Following a few bleak months, the UG Team Leagues made their welcome return this week. As per usual there was no shortage of controversy coupled with some scintillating golf. Amid the fanfare of the opening round of fixtures was a sizeable upset and also the blossoming of an internet sensation.

The much fancied Keith Spieth & The Johnsons got their campaign off to a disappointing start with a loss against #GCW. Though the newcomers were always going to bring plenty of quality golf, drinking prowess and sensational tweets, the biggest surprise came with the revelation that the Ogier Glacier has actually slowed to a previously inconceivable crawl, and may in fact soon be proved to be in retreat.

Fortunately for #GCW, the extra time afforded them by Keith Spieth’s stagnant frontman gave them ample opportunity to enhance their already impressive social media following. The game inevitably went to the final green and was eventually decided just minutes before the cockerel crowed, with Keith Spieth’s players all missing from just over 6 feet to hand #GCW an opening day victory.

In a clash of two previous winners the reshuffled A-Team took on New Zealand’s Beamers in a tantalising tussle which again went down to the final green. Replicating their musical heroes, Genesis, the A-Team ousted their frontman Tony Moss in the off-season amid media speculation crediting Moss as the golfing mastermind of the side. Clearly the omission of golf’s most regular bridesmaid, paid dividends as the A-Team ran out winners by the odd hole.

The final fixture in League 1 saw the coming together of two great rivals from previous campaigns as Michelle Wie’s Wet Slice played host to Something Els. After some early foreplay, Something Els raised their game and several penetrating drives from the totemic Stephen Cross set up a relentless flow of birdies which led to a resounding 3 hole victory and a place at the top of the table, albeit after just the one game.

Week two offers up plenty of mouth-watering clashes, with the highlight being that between The A-Team and #GCW who put their 100% records on the line. All eyes will no doubt be on the internet sensation that is the golfing glacier, to see whether the recent cold snap has hampered his progress further. 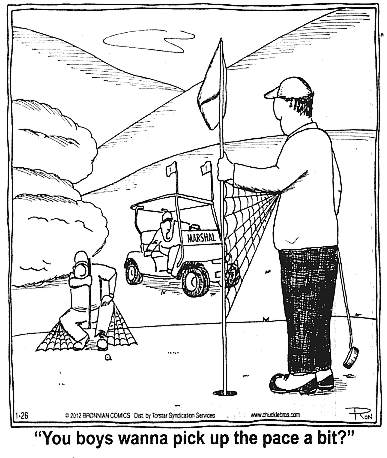