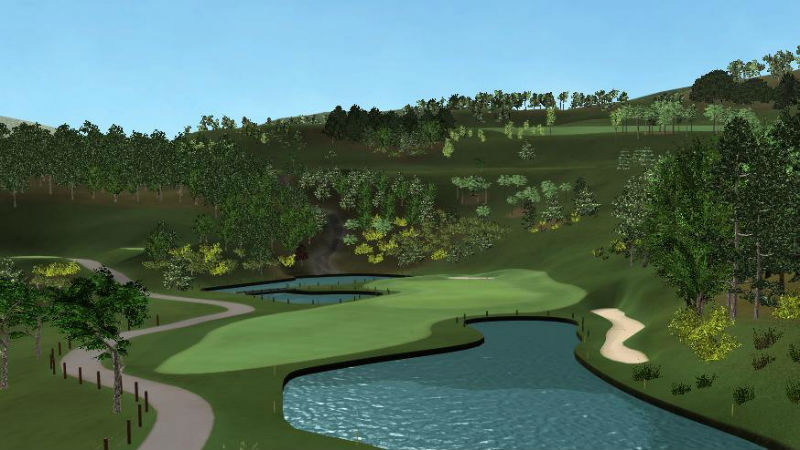 Mathematically there were three teams harbouring title ambitions going into the final round of matches in League 3: League of the Titans. However, in reality it was in the hands of Kant Putt, Mine’s a Gimme to lose. Just avoiding defeat would be enough for the league leaders, but with the experienced A-Nother Team and Keith Spieth lurking over their shoulders any sip-up against the always dangerous Something Els could open the door for the old campaigners.

With Spieth resigned to coming up just short in the title-race, they exuded a relaxed vibe heading into their encounter with Michelle Wie’s Wet Slice. Certainly over recent weeks, Spieth’s form has been on the rise with much credit attributed to the evergreen Clive Wells. On the flipside, Michelle Wie has been searching for the perfect balance and as a result has probably rotated her squad too much to guarantee consistency and the results have clearly reflected this.

It is no exaggeration to say that Spieth’s pushed the sartorial standards to an all time low this week with some attire branded “unwearable” by a member of Wie’s Wet Slice. That harsh dose of truth probably would have been best served up in the post-match debrief, as Spieth’s really set out to silence their gobby opposition. A flurry of opening birdies set Spieth’s on their way to a handsome lead. Wie’s seson was perhaps summed up best when they faced a 7 foot putt for the win, only to have their next putt from 20 feet and proceed to miss that one too. Ultimately the barrage of birdies and relentlessly slow play did for Michelle Wie as they ended their season with a solitary win and firmly routed to the foot of the table.

A-Nother Team were best placed to capitalise on any slip-up from the league leaders, but would first have to take care of business against the once again Drago-less Paula’s Creamers. The speculation surrounding Drago’s recent absence from the side has led to many believing that he is currently serving a lengthy drugs ban after footage emerged of his extraordinary training methods. Shorn of their talisman, Paula’s have taken the opportunity to blood some of their development players, and though the results may not have reflected it, much is expected of them in the future.

The youthful exuberance of Paula’s was matched with a flurry of birdies that would have troubled most opponents. With G-Hack at the helm of a buzzing A-Nother Team there was plenty of experience to ride the onslaught which they matched with birdies of their own.

As the tension grew, so the birdies dried up. The final biride of the match came on the 16th hole to give A-Nother Team the narrow advantage that would mean a closing 1 hole victory after the final two holes were halved in pars. It was a matter of waiting to see what happened to their title rivals as the decisive match hung in the balance. For Paula’s Creamers this spells the end of the road as they are set to merge with Michelle Wie’s Wet Slice for next season. What their name will be is anyone’s guess but an early contender has been pitched in the form of Charlie’s Hole.

Something Els have become somewhat of an enigma in recent weeks, known for their incredible flair and ability to beat anyone when fielding a ful side, but equally capable for some calamitous stuff when not quite in harmony. With Kan’t Putt Mine’s A Gimme only requiring a point to secure their maiden title, their blood would have run cold at the sight of a fully fit and motivated Els team looking to cause an upset.

In contrast Kant’ Putt’s team captain having suffered third degree burns after a boozy pool party, turned up looking like Simon Weston. The course of action for the captain was to ease his pain with large quantities of Asahi, which seemed to bring out the best in his and his sides golf. Both teams immersed themselves in the fixture and the result was an incredible atmosphere that brought out the best in every player. Early birdies were exchanged and the spirit in which the game was played was absolutely sensational. It was hard to believe that so much was riding on it.

A winning birdie on the 15th for Captain Delboy of  Els gave A-Nother Team (watching on from afar) hope of the upset, but Kan’t Putt came straight back with one of their own to level affairs and set up a tantalising finish. By now Captain Weston, having failed to walk away with a huge Chesterfield, had consumed so much Japanese lager that he was declared clinically dead. Shorn of their captain, Kan’t Putt turned to their reliable “Cageman” to haul them across the line. He delivered the necessary goods as he struck an incredible approach to just outside 6 feet.

When Els failed to get up and down for the par, the stage was set for Cageman to pour in the putt for the win and spark jubilant celebrations for the KPMG side. In scenes evoking memories of Weekend at Bernie’s, the victorious Kan’t Putt side took to the town to mark the occasion, lugging their recently deceased captain from bar to bar. Even after the ticker tape has settled, the shockwaves of this victory will be felt by the giants that fell in the wake of Putt’s wonderfully unexpected ascension to the summit.