There was only one topic of conversation at this team league and it was the return of Tiger. The build up was all about rumours that Tony Moss would be bringing a new putter into display. The famed Bullseye, his old Billy Baroo, had been allowed to be inducted into the golf hall of fame.

Boffins had recently calculated that if you added together the length of putts holed by Tony’s wand, you would have been able to get to Saturn and back ……. 3 times. Perhaps it was the allure of setting alongside Hogan’s 2 iron and Snead’s putter that persuaded Moss to part company with his only true friend? Racked with guilt on the eve of this weeks fixture, Tony realised the error of his ways and made a dash to Florida in a bid to reclaim his beloved flat stick.

With multitudes cheering him on and wishing him the best down West Smithfield street, Moss resembled a young Dustin Hoffman as he rushed to reclaim his true love. On the flipside of this heart-warming drama, was the fact that Clyde, Luke and Stuart were left to steer the A-Team ship. A prospect which appeared to have them well and truly rattled.

Surely a fixture against the whipping boys of team league was going to be the best scenario for a side shorn of their talisman? Alarm bells were sounded as early as the 1st green. With WK J Choi having wedged into gimme range, A-Team had a routine 9 footer for the half ….. which they missed. Surely an early blip? The 2nd hole was halved as both sides failed to convert from the 20 foot range – though having been only 85 yards from the green, A-Team would be concerned at their proximity to the hole. Whispers of “Tony would have got that closer” were starting among among the galleries. 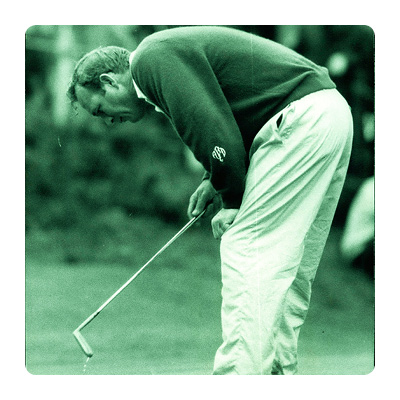 Choi seemed a transformed team as they matched an A-Team birdie on the 3rd to remain in front. Parity, however, was eventually restored as A-Team made the lone birdie at the next. A few holes in and several pints of birdie juice and Clyde Woods was starting to resemble the man who was once feared in basements across London. A couple of puffs of the chest and two further birdies were accrued. Surprisingly (in the minds of the A-Team anyway), these were matched by their plucky opposition.

With 7 holes down the game was level, and at this point members of the A-Team were diverting their glances away from their pulsating phones as Captain Moss called to check in from the waiting lounge at Heathrow. Attention was quickly back on the game as an almighty crack of his 5 iron saw Choi’s Craig Dallender rifle his tee shot under the shadow of the pin. Facing a 22 footer to retain hope of the win, Clyde had to step off his putt on multiple occasions as the whispers of “Tony would make this” rose to deafening levels. Now shaking like dogs shitting glass, all three of the A-Team wafted their putts to leave them with only a draw to play for.

Almost equally nervous, but crucially with nothing to lose, Choi negotiated their way down the final hole almost as neatly as A-Team but similarly requiring a chip and a putt for their birdie 4 and what would be an astonishing victory. One crisply struck chip and run was sandwiched by two nervy efforts, but ultimately finished inside the grip and sparked scenes akin to Brookline. Grown men in tears and others just stood gormlessly looking at each other. Their phones were once again vibrating furiously – to no avail as there was little hope of Woods et al breaking the news before a couple more beverages to ease the pain.

Aghast at events unfolding in the top match, The Urbanites and Sultan of Swing played at a somewhat lowkey match. With Graham Harris laughably using the excuse of a post-round “kettle bell” session (whatever that is) being the reason for his non-drinking a very dry and speedy game was the order of the day. It looked likely to be an unsuccessful trip to Bay Harbour for Ed and his Urbanite outfit as an early Sultan birdie tipped the scales in their favour. Something remarkable then happened and may be the only time it has happened all year in team league. Back-to-back bogies were recorded to catapult The Urbanites into the lead by the end of the 4th. Cries of “Jesus Christ” greeted Ed’s tee shot on the 5th as he stuck two fingers up to the bund-covered dog-leg and smashed his drive to within 9 feet of the hole. The conservative approach failed to pay off for Sultan’s who made a hash of their approach and allowed Urbanite the luxury of 2 putts to double his lead.

The final nail was hammered into Sultans coffin on the 7th hole as Ed dispatched a 6 iron 2nd shot into gimme eagle range – a putt that even Doug Sanders would have holed – on the par 5. The victory was confirmed with a final hole birdie to install The Urbanites as league leaders, to the surprise of all in attendance. The finale was greeted by some underwhelming scenes as Graham Harris shuffled off muttering about Kettle Bells, Ed flicked through Tinder in the disabled toilet and Jack skulked off to the range.

A fixture that used to get the hairs on the back of your neck standing up. That’s what The Beamers v Shaft used to be like “back in the day”. However, having been away from the game or fallen from grace (or both) this fixture pitted two sides desperate to open their account in the current league. This used to be a raging battle with some filthy exchanges and no inch given but has since developed into a rather civil affair with polite congratulations for good shots played and condolences offered for shanks struck.

There must surely be some sort of fire burning deep inside these once totemic players. Fond memories of their first title would no doubt have flooded back to The Beamers as they stepped foot upon the spongy Bay Harbour fairways. “It’s always a course we have felt comfortable on” suggested Gary Ngo in his programme notes. “The course really fits Adrian’s eye, so if he can drive the ball like we all know that he thinks he can, we really like our chances of giving it a really good go.” Indeed.

The good news for The Beamers was that Adrian certainly had the big dog eating this week. He send a plethora of absolute ripsnorters out there to enhance his reputation as one of the most powerful hitters in the game. The fact that he is at the centre of the “distance” debate now consuming The R&A and USGA says all you need to know. Remarkably though, the longest drive on the night was struck by Chris Masterton-Smith who obtains his impressive distance not through technology, but an impressive channelling of rage, frustration and incredulity at all he surveys.

This game came down to far more than power. It was about deft touch around the greens and a relentless ability to make birdies. Having been embroiled in a 12 birdie match last week in a losing battle against A-Team, Shaft were this week involved in an exchange of 14 birdies and an eagle. This was a golf on another level!

With consistently long drives, The Beamers had the luxury of hitting short irons into every hole and having ironed out the creases of last weeks return they looked truly comfortable with wedges. They gave themselves straightforward chances on every single green, as did Shaft. The difference was small but ultimately crucial. Birdies were exchange on the opening hole, before Shaft failed to convert from 12 feet on the second. The turning point was most definitely on the 4th green, having once again shared birdies on the 3rd, The Beamers converted one of their longer chances only to see Shaft lip out and hand a 2 hole advantage.

There was no further opportunity offered to Shaft as the New Zealanders proceeded to complete their beautiful scorecard with birdies on every single hole. The fact that Shaft shot 7 under par and still lost by a couple of holes is truly remarkable. They may feel deflated by the loss but will hopefully soon realise that they were involved in one of the great matches of Team League history.

This week may prove pivotal in the season. Surely Tony will not leave his A-Team to fend for themselves again? Are The Beamers back? Can WK J Choi maintain their newly found level? Questions galore, but perhaps only one answered this week as Graham Harris found out the hard way. No, he can’t play golf without beer!