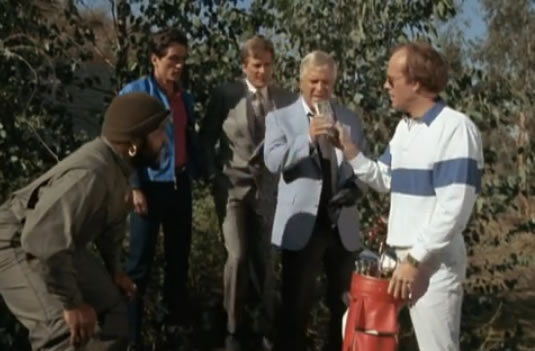 The A-Team could be on the verge of a surprise

Having toiled for much of the campaign, The A-Team have somehow given themselves a glimmer of hope of landing the title despite the omission of one of the games greats for the entirety of the season. As if by some twist of fate, the much hyped pre-season rivalry between The A-Team and Keith Spieth & The Johnsons is now set to be tested in the title decider next Monday.

Heading into round four of the league, it looked very likely that Something Els would be contesting the title having seen a great revival in their fortunes this term. Knowing that victory over the blunted A-Team would send them top heading to the final game, Something Els appeared nervy from the off, bemoaning their luck before even a shot was hit.

With such negativity clouding their mindboxes, it was always going to be a struggle to overcome the tenacious veterans, and so it proved as a characteristically gritty performance by The A-Team ground out a rather ugly 2 hole victory. That said, they’ll be cock-a-hoop to have given themselves a chance of stealing the title next week. There will be a week of furious negotiation within the camp as to the merits of reintroducing Tony Moss back into the team for “The Big One.” I pity Tony’s family as they will have to put up with journalists camped outside their front door as the speculation intensifies.

The dead rubber that was The Beamers v #GCW turned out to be a real ding-dong classic of the ilk that Liverpool and Newcastle used to dish up. #GCW took to the cats-arse-tight Harbour Town best, as they threw a barrage of birdies at the formerly excellent Beamers, without response. The highlight of the early holes was a wayward iron shot that ricocheted off a tree, back toward the green, clipped a rake and rebounded to 12 feet.

Perhaps basking in the glory of their fine play, or maybe starting to feel the effects of the beer a hole pace, #GCW started to unravel. Not needing a second invitation to pounce, The Beamers appeared to regain some of their old swagger as they gave themselves hope with back-to-back wins on 15 and 16 to reduce the deficit to 1 down with 2 to play. The Par 3 17th has claimed many a victim down the years and #GCW added their names to that list by handing the hole to their rivals in comical fashion. All square playing the last, but in very different mind-spaces, #GCW were up against a pumped up Beamers outfit, and, if we’re being honest, the result was never in doubt. Opening their account for the season, the Beamers celebrated their one hole win in style with all the flair that made them so popular last summer.

Last to finish, inevitably were Keith Spieth & The Johnsons whose “slow and steady always wins the race” approach has ruffled more than a few feathers this season. This weeks victims of the slow, painful treatment were Michelle Wie’s Wet Slice. On paper, this was set to be a ding-dong title-deciding monster of a game. In reality, it became a battle of the moaners as both teams looked unlikely to hole a putt from outside 6 feet. It became about as enjoyable as watching Man Utd, with very little to excite the neutral.

At one point a fox did run across a green, but sadly that was a brief moment of levity in an otherwise tortuous affair. Somehow Spieth and his men managed to accrue a one hole advantage at some point – in truth, there were very few eyes left open to witness the action, but we’ll take their word for it. A one hole victory it was and as such they now just need to avoid defeat against The A-Team next week to claim the title.

With a history of Keith Spieth choking, the smart money may go on The A-Team to snatch the league, though the bus will no doubt be parked as Andrew Slowgier adapts to his new pre-shot routine.