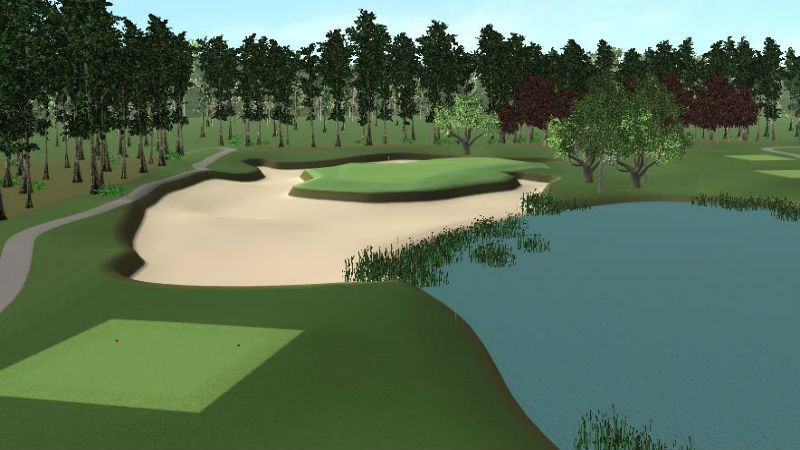 After last week’s drawn so-called title decider, the season was looking like it would head to the final week with more storylines than Eastenders, but in a remarkable week for golf, the destination of the title has potentially changed track once more.

It was the age-old rivalry of A-Nother Team and Keith Spieth & The Johnsons that dealt the league a blow to the solar plexus. As historians of the great game of indoor golf will be well aware that Keith Spieth has a dreadful record against A-Nother Team, and their current form certainly didn’t bode well for this most regular of clashes.  As ever, there was interest from across the globe and A-Nother Team’s recent vulnerability gave hope to their arch-enemies.

Quite possibly the biggest surprise was the fact that this game was finished before the witching hour, for which Chris Masterton-Smith credited the benching of Andrew Slowgier for the opening three holes. Despite the omission of their most famous player, Keith Spieth reeled off 3 birdies over the opening holes, only to meet a stonewall of birdies flying right back at them. With both sides in the mood, it came as no great surprise when the 15th hole was halved in eagles.

The relentless flow of birdies had to give at some point and it was A-Nother team that cracked first, importantly handing the initiative to Spieth who found themselves on the 18th tee 1 hole to the good and on the verge of a victory that would mean so much to them and their loyal fans.

Having thrashed out the composition of the perfect sausage sandwich on the tee, Spieth gave no glimmer of hope to the oppo as they played a flawless final hole to seal what was a highly satisfying win. This defeat has left A-Nother team in absolute turmoil, so much so that that staggered away from the course wittering about how they thought The Belfry was a great golf course ….. let’s hope they recover soon.

With A-Nother Team “doing a Chelsea” this season, Kan’t Putt Mine’s a Gimme have established themselves as the likely successors to their crown. This week the proposition of an unpredictable Michelle Wie’s Wet Slice should not have appeared overly worrying on paper. That said, Kan’t Putt got off to an indifferent start with their captain requiring gas and air for nerves. They escaped an early setback after holing from 25 feet for a fortunate half. Wie was on fine form throughout and adopted a high banter policy that rivalled some of the best we’ve seen.

Coupled with the high level banter was a much slicker brand of golf than we’ve seen of late from Wie. Kan’t Putt were pushed to their limits and despite not bringing their sumptuous best, showed real championship pedigree as a late flurry of birdies secured the win and set them up for a victory parade in two weeks’ time.

With most of the attention being focussed on the exploits of the top two, it would have been a mistake to neglect the collective talents of Something Els and Paula’s Creamers. Els are possibly one of the most mercurial teams in all of sports, one week capable of matching the ability of the 1981 US Ryder Cup team and the next incapable of laying bat on ball. Lining up against the fallen giants of Paula, this fixture had everything that you could wish for.

Creamers rolled back the year and took the early lead birdieing the opening 2 holes as Els failed to hole both birdie attempts. With Els afforded a clean bill of health they were able to field a full side for the first time in weeks. Perhaps this added to the dismay experienced by their slow start.

Showing the character that has established them as one of the most popular sides in the game, Els reeled off 5 straight birdies to secure a quite astonishing turnaround and victory on the penultimate hole. The result was harsh on Wie, who brought a lot to the occasion and in doing so performed some of the most convoluted banter plays of the season.

Something Els may not be able to win the league, but if they produce their best golf next time out against Kan’t Putt, then they may well have a hand in the destination of the title.