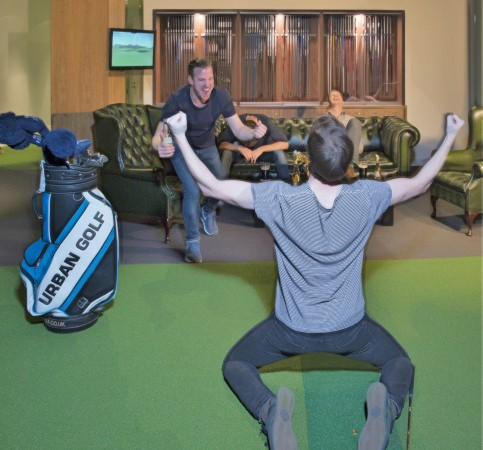 Coming into the final match of the group phase the outcome looked very much a forgone conclusion with The Beamers looking likely to continue their dominance and progress through alongside The Minster Swingers. It was very much in the script for the also-rans to duke out a turgid bottom of the table contest as each side grappled for the merest semblance of pride from a torrid campaign.

What actually took place, turned out to be one of the highlights in the league’s illustrious history. As the tournament director so aptly put it; “That was actually pretty good!”

In the long history of Golfy McClubface (there have been several names/franchises but the players have remained throughout) there had never been such a drought of even moderate golf. This week provided the best opportunity against the hitherto whipping boys of the league, WK J Choi. Remarkably, after such turmoil, Golfy still had a mathematical chance to qualify in 2nd place and progress to the semi-final.  Choi, may have been shorn of one of their superstars but they came out with an intensity that gave their opponents the real heebee-jeebies.

With an excess of players on their roster this week, McClubface left Dr Wells on the sidelines for the first three holes, hopeful that he may get distracted by one of the bevvy of beauties eyeing him up from the caddyshack. McClubface were installed as the heavy favourites with on course bookies – mainly due to their numerical advantage rather than recent form – and came out all guns blazing with a fine opening birdie. Said birdie was duly matched by a single-handed effort from Choi and even raised on the 2nd with another. This time is McClubface who secured the half with a tram-liner. It was notable how low key the celebrations were, but inevitably the recent restraining order imposed on Slowgier would play its part.

Undeterred by the return fire, McClubface fired off two more birdies and were mightily relieved to only see one coming back their way as they established the first lead of the match. Even though they were making birdies, no credit was to be given to Andrew Slowgier whose putting stroke looked like something that might be more suited to Halloween. A man for pressure, he is not, and he looked as if the weight of the world was on his shoulders heading down the stretch and not just the battered reputation of his craggy Golfy McClubface team.

With Choi hanging on grimly to head down the final hole just one behind, the spectre of yet another McCubface collapse loomed large – so much so that the umpire had to call upon his light-meter to assess whether the game could be concluded. Given the green light, Choi’s booming drive gave them the opportunity to take on the par 5 green in 2 shots while McClubface could only clamber into the greenside trap. A club twirl followed Choi’s Wonderboys 2nd shot that went off like a laser and after a soft bounce came to rest just 11 feet from the hole. Given their reputation as anti-closers, it was no great surprise when their bunker shot failed to trouble the hole. Already confident in the outcome, McClubface started to vacate the sim as it was inevitable that the putt would drop to put a full stop on the campaign that will officially go down as the worst in their history.

While it was all doom and gloom for McClubface, Choi had produced some fantastic golf in what was a very high quality match and secured their first ever points. Though they would be disappointed in the result, McClubface played their pantomime part in a match that will be played on loop on UG TL Gold.

Playing peerless golf over these past six months, The Beamers looked destined to continue their run against the Minster Swingers in a game that actually had far-reaching consequences for both leagues. Rumours started to circulate about half an hour before tee off that these sides had already reached an amicable agreement to play out a bore-draw and ensure safe passage for both sides into the next round.

A combination of feeling duped and the only alternative of watching the turgid match being played out at Anfield as their only option, led the galleries to voice their discontent toward the players. It wasn’t too long before both sides were fully aware of their obligation and slipped back into their usual routine flow of birdies. Against the early backdrop it could have been tough for the sides to regain their usual focus, but that would be a slight on their high levels of ability and rare professionalism!

The opening exchanges were electrifying as the first 2 holes were halved with birdies. As the raucous crowds began to quell their initial booing, the barracking began to come from the Swingers as Aiden poured in a putt from all of 40 feet on the 2nd green only to confront The Beamers benched skipper Glen with a feverish tirade of abuse akin to Patrick Reed at Gleneagles.

This prompted Glen to rise from the dugout and insert himself into the action. Almost immediately he struck with a 40 footer of his own to spark some ridiculous celebrations and quite possibly the most homo-erotic high fives since the volleyball scene in Top Gun.

With birdies in seemingly endless supply it came as a surprise when the deadlock was finally broken on the 14th hole by Swingers. Having followed up a crisply struck wedge with a well-judged swinging putt for birdie they were cock-a-hoop to take the lead as The Beamers failed to convert their equally tricky birdie putt.

A rare half in par followed but normal service quickly resumed with birdies traded on the following hole. A rare slip-up by the Swingers on the 17th offered a small opening for The Beamers, which they duly took with yet another birdie from their monotonous machine. Heading down the 18th all square and with the other match in the pool equally tightly poised, Minster Swingers knew that they would have to try and force a result to ensure safe passage. With nerves now showing for the first time in the match, neither side was able to get away the colossal drive required to reach the final green in two blows.

Having both laid up into the kill-zone about 40 yards shy of the green it was to be a short-game shoot-out into a very low sun. First up were the Swingers, who produced a perfectly judged pitch to within comfortable gimme range, belying their status as TL rookies. Knowing exactly what was required to close out the match, The Beamers had much experience upon which to draw – like anyone they’ve had moments they’d rather forget over this distance, but the level of concentration and poise that they managed to achieve in this moment was truly awe-inspiring. Nobody was left in any doubt as to their aim with this shot. They were all out for the win.

After the first two players had eased into gimme range, the stage was clear for their last man to pull off the box office shot for the win. As soon as he struck it, Aiden started to raise his arms in celebration. As the ball landed just feet from the hole, as softly as a butterfly with gout, it looked destined for the hole. Another hop, check and released and it delicately kissed the flag ……. Only to cruelly ricochet onto the lip and end its journey less than 1 inch from the cup.

This was one of the great matches, with the draw a fitting result. It is result that confirms the Minster Swingers as a side of great quality, and also ensures that any complacency that The Beamers may have had will well and truly be extinguished going into the knockout phase. If these two meet again in the final there are guaranteed to be fireworks.