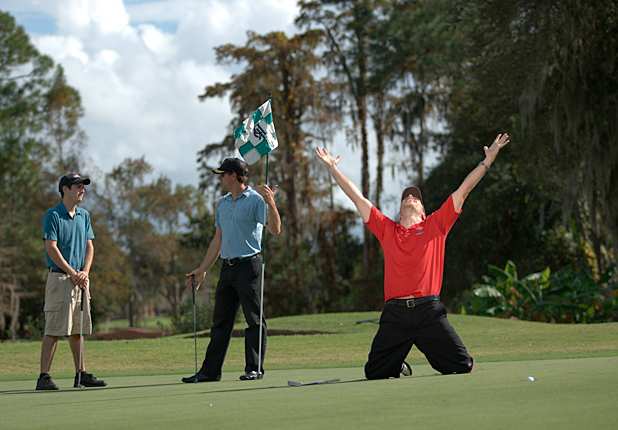 Gary Tarrant just had one of those days

If there is another financial crisis, it could well be down to the formation of this league. We can only imagine some of the excuses that the players in this league have come up with in order to make their tee time each week. Given the results this week, it looks like a couple of the teams left their golf swings in the office.

First on the tee this week were a reshuffled #GCW against newcomers Infinity International. The pre-game pep-talk from Infinity’s Matt has become a weekly ritual now, and is attracting quite a crowd as opposition members seek to understand the strategies and nuances behind such inspiring words.

#GCW’s stand in captain for the week, Jimbo, seemed more intent on expanding the vocabulary of the group with some wonderfully creative and colourful language during the early holes as he grappled with his powerful game. Infinity were able to capitalise on this malaise as they took the opening hole and secured a miraculous half on the next after one of the great up and downs.

Sadly though, Infinity’s wait for a first win will go on as their luck ran dry. It seemed as if the writing was on the wall after one of #GCW side hit what our course ranger thought was the luckiest shot he’d ever seen. Facing a short 30 yard pitch, the youngster proceeded to knife the ball at a speed not much slower than light, only to see the ball disappear into the sanctuary of the hole. It was at this point that Infinity’s captain turned the air blue with his observations on the shot.

A side who haven’t needed much luck so far were next up on the tee as top of the table Stevie’s Wonders looked to continue their stellar run against Knights in Shining Arnold Palmer. After a few weeks in the shadows, Stevie’s captain Garry Tarrant turned in one of his finest performances ever, and aside from nursing the odd shandy, was absolutely flawless.

The Knights not only struggled to contain Tarrant, but they also struggled with the slopes and pace of the New Springville putting surfaces. Surely a combination that meant only one thing; a second place finish! Stevie’s Wonders have looked peerless of late, and will certainly not fill Infinity International with hope for next week’s encounter. Captain Matt best start preparing his inspirational words now.

Los Severianos are proving to be the most unpredictable sporting franchise in a generation. After last week’s disappointing performance we were unsure as to whether they could come back from such a sorry performance, but as if cleansed of the memory they appeared new and revitalised. Crisp iron shots and sure putting led to a resounding whipping of The Course, reducing her to dust. We would offer a prediction for next week against #GCW but, obviously, that would be futile.