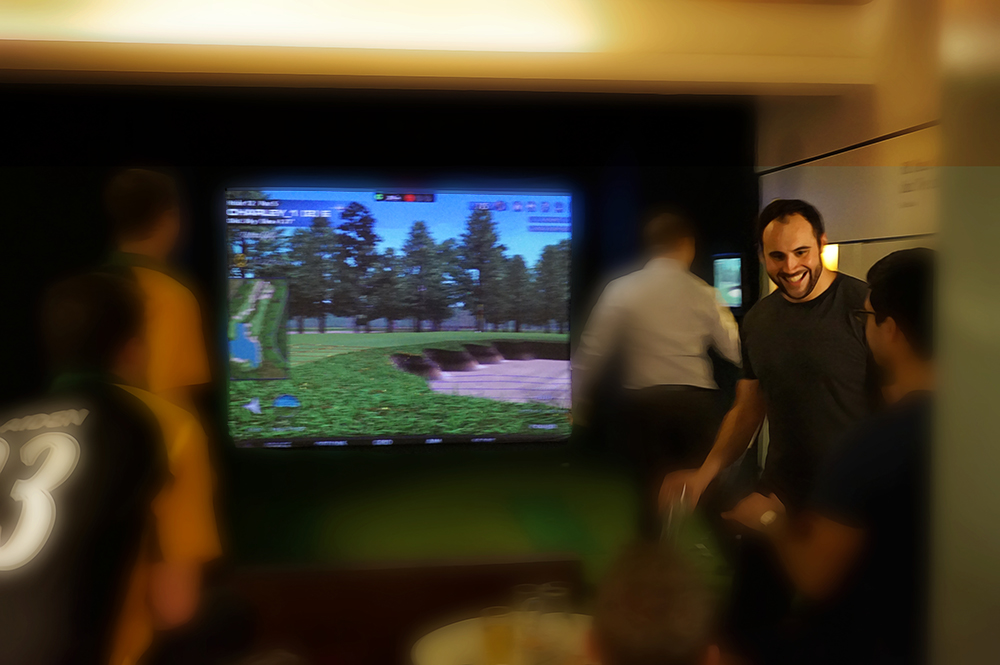 A jubilant Charley Hull on the verge of toppling The Beamers

Last week’s return to action certainly produced some surprising results and gave a glimpse of a potential shift of power. The glimpse, this week became a glaring reality as all we previously knew has been thrown into complete disarray with reputations counting for nothing in this new season.

The Beamers have long been the dominant force in the indoor game and have often been likened to Alex Ferguson’s Man Utd, showing an unquenchable thirst for victory over an unfeasibly long period. Last week their air of invincibility was blown apart as Fists of Furyk gained sweet revenge. All expectation was that they would return to winning ways against Charley Hull’s Unraked Bunker, and certainly the early action did nothing to change this.

Glen Oliver’s side looked to extend their advantage but an unfamiliar lack of rhythm on the greens meant that couldn’t convert their number of birdie and even eagle chances. As the holes edged by, the belief in Charley Hull’s Bunker grew that they may be able to live with the much-decorated Kiwis. With the Beamers missing yet another relatively short chances, Hull managed to level the match on the 16th green. Clearly excited by their strong showing, Hull’s Max Garth got somewhat carried away with his attempts to hit his drive into next week and all but whiffed it as his ball daintily trickled off the front of the tee – well short of the ladies. Fortunately, his team mates were focussed enough to carry him down the hole and secured a third consecutive birdie which was enough for a half.

For the second week running, The Beamers fate would be decided on the final green, and alas with the same result. Hull held her nerve to complete the grandstand finish and hand The Beamers a second successive defeat which has left them pointless and with no chance of reclaiming their title. The challenge for Charley Hull now will be to follow this win up next week, a feat that Fists of Furyk were attempting this week against Dude, Where’s My Par?

Furyk’s talisman, Ed Drage, has been talking all week of the need to refocus and avoid being carried away by the greatest victory in their history. It wouldn’t be surprising to hear if he had been in constant communication with his men, urging them to forget the victory. The Dude’s came in still sporting the mental scars of witnessing Clive Wells in his spray-on girdle last week and bore the look of young men exposed to the most sordid of acts. It wasn’t long before they had to stand back and watch another filthy occurrence as Furyk drained a 45 footer on the 3rd hole to move 2 holes clear.

Dude’s approach play was pretty average throughout as they struggled to create chances. With the writing very much on the wall for a long while, Furyk ended the contest with a spectacular chip in for eagle on the 17th green. That it took as long to secure the win will be a concern to the militant Drage who will no doubt be booking his men into a South African boot camp this week to remove any sense of individuality. Watch this space, but it would be of no great surprise to hear reports of Jonny Morton having been forced to crawl naked across gravel while chanting “I will not 3 putt.”

In the less murky world of match three the renaissance of UG’s oldest swingers, Golfy McClubface, would have to continue without the buffed presence of Clive Wells who had been withdrawn from the side after allegations of exposing himself to the Dude’s the previous week. Their opponents, with James Godwin now fully reintegrated, were also looking to continue a revival. The game was an absolute masterclass in getting the most from the game as the sides combined for a stupendous 15 under par total.

If it were a boxing match McClubface would have been marginally ahead on points, but fortunately there were no points being issued for style as Godwin benefitted from a couple of questionable knifed shots that they quietly converted into birdies. The game was all square after 5holes with both teams 5 under for the card – including an outrageous pitch in from Keith Schrod for eagle. McClubface produced a putting display the likes of which haven’t been seen since Royal Troon in 1997 when Justin Leonard literally holed everything he looked at.

Yet another tram-liner gave the veterans the lead on the 16th which they would maintain right to the death with a further two birdies. That they needed to shoot 8 under to claim the narrow victory speaks volumes for the standard of Everybody Needs Godwin.

From here it looks as though next week’s match between McClubface and Furyk will be the title decider, but should Godwin add to The Beamers woes, the race could open up and provide a great spectacle to the lowest scoring tournament in all of golf.