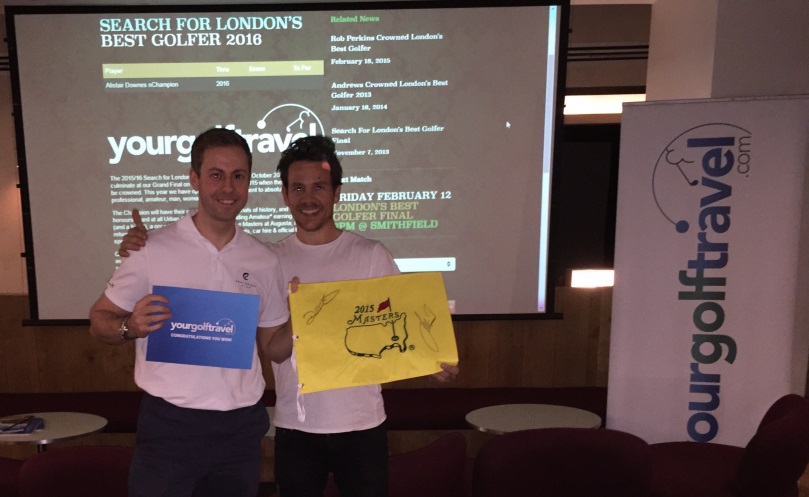 On Friday night Alistair Downes battled past a jittery putting stroke and London’s finest golfers to land the trip of a lifetime to The Masters at Augusta in April.

Having started the evening with 23 men and 1 solitary lady in the final of our Search for London’s Best Golfer, the field was whittled down through a series of 6 hole cuts and harsh shootouts over a particularly tricked up TPC Sawgrass layout, which tested the nerve of each and every player.

With birdies seemingly impossible to come by in the early stages, damage-limitation was the name of the game as nobody appeared immune to the odd 3 or even 4 putt. As a man renowned for employing a minimum of five different putting methods in a round, the tricky surfaces did not bode well for Alistair Downes, whose imperious ball-striking was being undermined on a regular basis by his moody putting stroke.

Taking the spotlight in the early stages, however, were Nick Saunders and Hamish De Run – high pedigree golfers with a history of upsetting the odds, and plenty of people along the way – who both cruised through the first 12 holes pouring in par putts and beers with apparent nonchalance.

This year we had only one former champion in the field, suggesting we would likely be celebrating the coronation of a new champion, though David Andrews was showing signs of the form that landed him the 2014 title. Alongside Alistair Downes he survived a nervy elimination shootout to progress into the final 6. Sadly for the former champion he joined a decorated list of players whose journey ended before the final three; Tony Moss, Aravinda Neuman, Clyde Woods and Jeremy Tiernan all victims of the harsh format.

On an evening of twists and turns, the biggest surprise came when the abovementioned Nick Saunders unravelled in a mind-bending blur of colourful language, comical short-game pyrotechnics and world championship drinking, to exit proceedings before the crucial stage.

Making it into our final three to play 6 holes for the title, were Alistair Downes, Hamish De Run and a rather subdued Andrew Ogier. New Zealand’s Ogier had very much slipped under the radar throughout the final whilst playing some very neat golf. Perhaps still feeling the backlash of a recent Twitter sting, Ogier hurried around the course and must be commended for the improvement in his pace of play.

The opening three holes saw Ogier, zen-like, negotiate them without concern in even par while his opponents struggled on the putting surfaces with a couple of 3 putts a piece. Standing on the 16th tee with a 2 shot lead, Ogier looked unflustered, content and remarkably sober! Drawing a 3 wood from his bag for a safety on the reachable par 5, Ogier managed to stun the gathered patrons as he proceeded to perform a text book “stone-cold top” into the previously unnoticed water sitting at the front of the tee.

Barely able to retrieve his jaw from the tee box, De Run at least managed to get bat on ball, though sending his ball into the trees to the left of the fairway. Downes showed no sign of nerves, propelling the ball to the sanctuary of the fairway. All focus was now on Ogier and whether he would be able to gather his composure to maintain in contention, but clearly shaken and much to onlookers dismay he capitulated over the closing holes to play himself out of the title whilst simultaneously scarring the retinas of those unfortunate to witness this once great man’s sad demise.

De Run lost a little ground on 16 as Downes negotiated the hole in birdie, and subsequently traded 4’s on the treacherous 17th hole. With a single stroke between the two likely contenders, the pressure was palpable on the final tee. With no intention of flirting with the water on the left of the fairway, Downes blasted a 3 wood toward the trees on the right side with the confidence that a bogey five would likely secure his victory. Understandably De Run was looking to give himself every chance of making par or better with an aggressive drive. A late twitch sent De Run’s ball left and toward a watery grave that was confirmed with a collective grown from the galleries as the ball plummeted into the aqua.

All Downes had to do was chip out, wedge on and not yip his putts. Inexplicably, he blasted his pitch shot into the water on the far side of the fairway and made things a little harder for himself. As De Run dispatched another ball to the bottom of the lake, thoughts turned to Ogier who despite being escorted down the final hole in an air-ambulance, actually had a sniff of a chance with a par.

Needing to secure a 6 to win the title, Downes calmed his nerves, reverted to the double-handed reverse claw pencil grip that had served him so badly and somehow manage to cosy up a 10 footer and land the title he so coveted.

Despite our best efforts we have been told by our new Champion that he will not be taking us with him to The Masters in April, where he will be treated to return flights, accommodation, car hire, tickets to all 4 days and his own personal Masters Patrons chair – all courtesy of Your Golf Travel.

No doubt the coming weeks will be a whirlwind for our Champion as he attempts to balance the demands of his impending trip, wedding preparations and deciding upon which putting stroke to invent next.