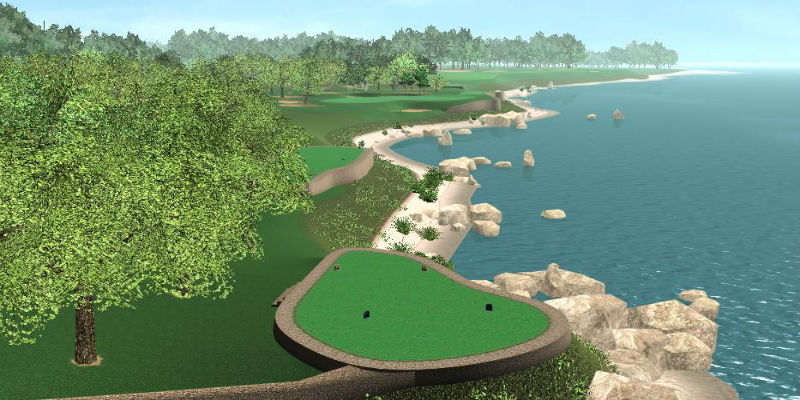 Having seen all the teams in action, we were not expecting any great upsets this week, neither were we expecting the couple of one-sided scorelines that occurred. This looks like it could be pivotal week as the teams will no doubt be closely scrutinising their selection policy – as much in personnel as in their beer selections.

The one result that was far from sensational came in the opening game as Arnie’s Army took on Shank or be Shanked. Having been unfortunate to lose last week, The Shankers came out with the intention of righting a few wrongs. First port of call was the bar, where they nearly cleaned out the 19th hole of Gamma Ray and Neck Oil much to the pleasure of Beavertown.

In an extremely well spirited game, the banter was flying from the mouths of the Shankers, and despite putting a brave face on it Arnie’s Army were showing signs of cracking. Arnie started strongly knocking in close on the 12th to 5ft from 190 yards, looking certain to win the hole, before the Shankers ‘Iceman’ chipped in from 15 yards to halve the hole. Shankers kept themselves in the game by holing some great putts, and on the 16th Arnie’s failed to get up and down from what would be a normally regulation 10 yards from the hole.

Riding their luck on the17th Arnie’s chipped in with a freakish knife that pitched on a bank, went sideways and then somehow disappeared into the hole despite travelling at close to the speed of sound. All square on the 18th tee, The Shankers crucially managed to keep one drive dry, finding the sanctuary of Clint Eastwood’s back garden. After making a miraculous par they watched in disbelief as Arnie not only failed to win the match from 8feet, but missed the one coming back too, thus handing victory to the now well-oiled Shankers.

What a difference a day makes, – or in this case, a week – 168 little hours, Shepherd Neame lost their powers, now seeing only pain. Clearly struggling to get enough Asahi on board, the Shepherds were truly awful from the outset. Their performance improved slightly as their blood alcohol level increased, but in all honesty their goose was cooked from the start. Paula’s Creamers were as good as the Shepherds were bad, and quickly saw off the threat of the brewers’ “ginger Bubba” with a plethora of birdies.

In fairness to ginger Bubba, the only similarity he had to the hugely unlikeable American is the fact that he has arms and legs – you’d be delighted to share a pint with the man from Shepherd Neame.

Although Paula’s Creamers put in a good performance on the course, they are causing controversy away from it as they continue to insist on drinking tap water alone. Don’t interpret this the wrong way (we don’t encourage drinking) – we actively encourage drinking while playing golf. There are several scientific theories that support evidence that beer is actually good for performance. We would refer you to a recent paper by Dr A. Ogier. In any case, abstinence in a league containing two breweries, is a sinister offence and will be looked into by the committee.

Rounding off proceedings, and understandably baffled by a certain teams abstinence were crowd favourites BEAVERTOWN. Where these boys may lack in the golfing department, they more than make up for in consumption. This week they focussed their attention not on birdies, but drinking industrial quantities of Cwtch and Fubar, and in this case were highly successful. They may have come out oon the wrong side of this battle with The Course, but they continue to win the hearts of the masses and their inclusion of an Irish Kurt Cobain will only enhance their appeal in the weeks and months to come.