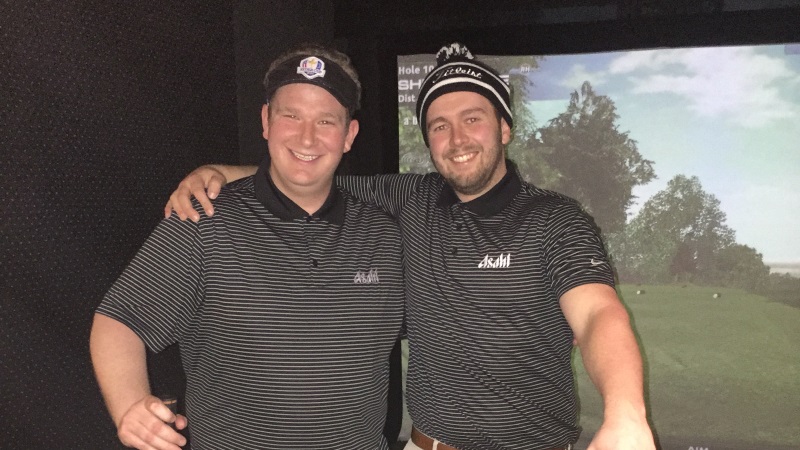 It was considered a foregone conclusion. The, thus far unstoppable Paula’s Creamers would trounce the pointless BEAVERTOWN to complete a clean sweep of victories and claim their title amid jubilant scenes and bottles of Evian flowing like wine. With Shank or be Shanked taking on the course and their only chance being an act of god, all bets were off on the title.

Rivalling the Great Triumvirate of Taylor, Braid and Vardon, the Shankers own triumvirate of “Straight-hitting ice man”, “handsome Stu” and “the quiet one” can very much claim to be the modern equivalent. With the pressure virtually off them, they set about their task with relish, opening with a flurry of birdies.

The Quiet One making his presence known with a fine solo birdie up the first hole, set the wheels in motion. As the Gamma Ray flowed, so did more birdies. Six birdies in total gave them a handsome victory and, as consolation, aa mathematical chance of lifting the title. Skipping around in double quick time gave them the opportunity to check in on the form of the Creamers whilst enjoying a few more beers and sharing their outdoor golfing prowess with this bunker masterclass.

In the sideshow to the title Shepherd Neame took on the recently flappable Arnie’s Army, who after a busy weekend at Bay Hill must have been feeling the toll. In the greatest traditions of UG Team League, the Shepherds limbered up for their game by downing pints of premium Japanese lager clad in branded team shirts and novelty headwear.

As the man hugs were being exchanged in the dead rubber, BEAVERTOWN were performing one of Jesus’ miracles. They had added golfing ability to their already legendary sartorial elegance, facial topiary and beer drinking excellence. Clearly they ‘ve been busy this week brewing up the perfect elixir to conquer The Creamers. Despite the relative ease of the proposition ahead of them, The Creamers looked somewhat nervy as they supped on their exotic cocktail of Hydrogen mixed with Oxygen.

Remarkably BEAVERTOWN not only sensed the anxiety, but they were able to increase it with some uncharacteristically sensational golf around the devilishly tricky Druid’s Glen Course. Opening up with a birdie-eagle combo, the brewery had the Champions in waiting in a pickle. This was a time to prove why they would be champions, by finding a way to get across the line. As the old adage goes: “if you find yourself in trouble, turn to the Lord and he will save you. In the absence of the Lord, turn to Drago whose long driving and accurate iron play is sure to be the next best thing.”

Turn to Drago they did, and he proved why he has established himself as MVP this season, and target for several other teams in the leagues. A stunning backs to the walls performance was still required as they found themselves two down on the 17th tee. Needing to win the last two holes to win the league, if ever there was a time to take to drink, surely this was it. But no, The Creamers stuck to their guns and driven on by Drago, clawed back the 17th hole with a birdie. With BEAVERTOWN now well down the craft beer road of no return, Paula’s Creamers took advantage to win the final hole with another heroic birdie to take the title.

Triumphant scenes followed- more so from BEAVERTOWN who had secured their maiden point of the season. While Paula’s Creamers basked in the glory of their triumph, many questions remain for next season: will BEAVERTOWN kick on from this point to become a force in the indoor game? Will Shankers “handsome Stu” be allowed off the leash to play next season? Is this the end of the road for Arnie’s Army? Have Shepherd Neame found the perfect banter formula to be successful at this level?