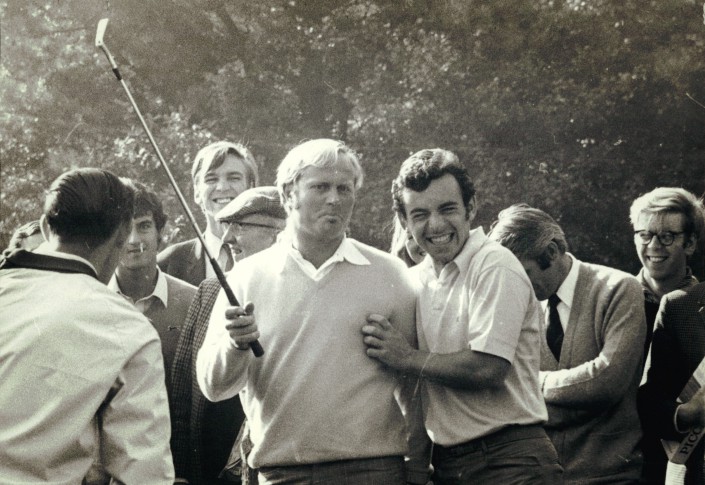 For the first time, Team League was played on Halloween and, fittingly, a couple of the favourites had an absolute horror show! As you might expect, the youngsters absolutely lapped up the holiday spirit and revelled in upsetting the odds.

Having waltzed through their opening week, Stuper Mex were talking up a huge game ahead of their bout with All About The Jazz. Stu had gone on record to say that if he couldn’t beat The Jazz left-handed then it would be time for him to give up the game. Given that the Jazz lost on debut, Mex’s confidence may have been well-founded but there wasn’t a huge amount of data to go on.

Unfazed by his gigantic opposition (Jazz fielded a 6ft 8 colossus who made Gordon Sherry look like Ronnie Corbett) Stu stuck to his usual brand of “nouveaux golf” – the sort that turns the stomachs of those who appreciate the lost artistry of the game – with booming drives, reducing holes to the bare minimum. In The Jazz, he had a side that could match his power and after throwing his best at them over the first few holes he was still not making inroads.

It was The Jazz who broke the deadlock as they brought the house down with a 50 foot putt that moved grown men to tears. This was certainly a blow to Stuper Mex, and keen not to let him regain his senses, The Jazz struck again on the very next hole to virtually sew up the game. With his fate assured, Stuper Mex completed the ignominy by dispatching his drive on the final hole into the Auld Grey Toon.

This was a thumping in anyone’s language, and one that could spell the end for Stuper Mex should he live up to his word. So frustrating it must have been, that one suspects even Mex will be reluctant to bow out on such a bum note.

Game 2 brought together two of the opening week’s losing sides in Shanks A Lot and I Like Big Putts. With both sides have shown glimpses of talent in the opening week, they would both have been optimistic ahead of this clash. Both sides had something to cheer early on as Shanks glorious opening birdie was quickly cancelled out by an equally adept birdie by Putts on the following hole. Over the first six holes Shanks consistently gave themselves excellent chances for birdie but failed to come to terms with the subtleties of the Old Course greens.

With three holes remaining the sides remained locked tight, thanks in part to an outrageous 50 foot putt for half by Putts. It would surely only be a matter of time before Shanks found their touch on the greens, and the short stick showed its first signs of life on the 16th when they converted from mid-range to take the lead.

With confidence growing and a degree of resignation creeping into the Putts ranks, Shanks secured the points by winning the Road Hole. For good measure, and reflecting their superiority, they nailed a birdie on the last for what looked like an easy win. They’ll certainly have grown from this performance, but what becomes of Putts?

The City Swingers crashed the Team League party last week with a mesmerising debut win that brought back memories of other great debut performances. Beating The Jazz last week was one thing, but coming up against the collective might of The A-Team would be a test that could prove a bridge too far. Perhaps, given A-Team’s struggles to blow off the cobwebs in round one, there was a glimmer for the newbies. They certainly weren’t burdened with any previous scars and strutted into the sim oozing the sort of confidence that only comes from blissful ignorance.

The A-Team have made their name as one of the most talented sides in the game by reeling off an endless supply of birdies, thinking nothing of shooting 8 under for 9 holes, and so started this match. Remarkably, Swingers weren’t fazed in the slightest and matched them blow for blow over the opening 3 holes. The early stages caused many in the galleries to hark back to the great A-Team v Bulbous Quegs match two seasons ago.

This game was shaping up to be a test of who would blink first. The first chink was shown on the tricky 15th as A-Team failed to make birdie for the first time. Though they were putting from 25 feet, this would be a rare opportunity for The Swingers and one that they never looked like turning down. The game was quickly levelled as A-Team very nearly holed a wedge on the 16th – unmatched by Swingers.

As the A-Team all found the sanctuary of the 17th fairway it looked as though The Swingers were going the way of so many previous opponents. Cries of “their heads are gone” bounced off the windows of The Old Course hotel after the first two attempts to hit the fairway ended out-of-bounds. Fortunately the final man was able to get a ball in play some 240 yards from the hole. This is a near impossible hole to birdie, so the par that The Swingers managed to scramble was all the more impressive and even enhanced as it secured the half to take the game up the 18th all square.

With the final hole a mere drive and a flick it seemed inevitable that the game would be halved in birdies and go down as one of the great tussles. Swingers showed some real class to apply huge pressure on their esteemed opposition by hitting the wedge approach stone-dead. As arguably the greatest wedge players in all of golf, all bets were off one The A-Team matching The Swingers. As each player took his shot it became clear that a change may have taken place in the minds of these great players. Just a small percentage difference, almost indiscernible nut noticeable nonetheless. Uncharacteristically they all failed to get the ball close and even more remarkably failed to scare the hole with their putts.

This was a huge win for The City Swingers and certainly elevates them to title contenders, but the result could be even more significant than that. Was this A-Team’s Y.E.Yang moment? As unlikely as it seems, this could be the time we look back to when the cloak of invincibility was terminally fractured.