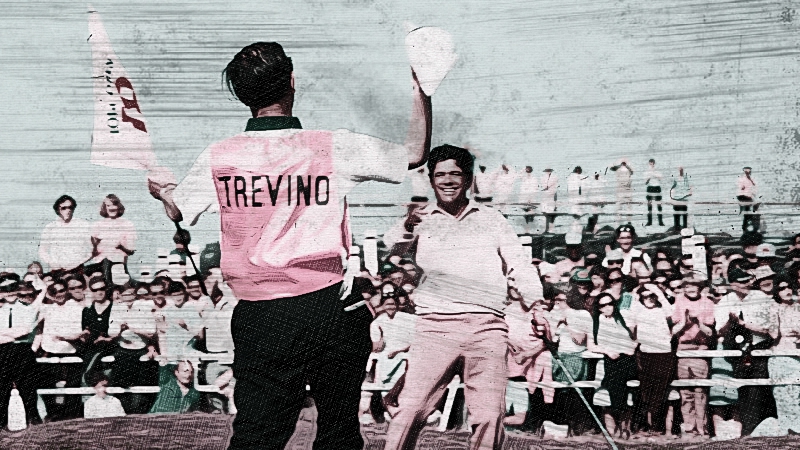 League 2 holds a lofty reputation for entertaining golf, banter and plentiful consumption of craft beer, so the onus is very much on the newcomers to the league to maintain these longstanding traditions after the watershed. While the golf has often been spectacular, the galleries (much like those in Phoenix) have come to expect a certain level of entertainment and will not be shy in letting players know their opinion.

So, it was with rapturous applause that the popular WK J Choi were welcomed onto the tee with a warm greeting also afforded to the debutants Alan Pitchmarsh and The Greenkeepers. The true test of a team’s credentials is often said to be most acute in the early stages of their debut, and Pitchmarsh certainly looked assured at this stage. While they recorded mere pars on the opening holes, they looked comfortable in their surroundings and were keen to impose their own brand of banter on the encounter.

After a closely fought first few holes, both sides began to loosen up as the series of short par 4’s that define the back 9 at Mauna Ocean. Choi found the fairways on a regular basis with their specialist utilising his short, punchy action to good effect as they positioned themselves to attack the accessible pins. With bogeys out of the equation, the game needed some spark to get the birdies flowing. This was duly delivery as Choi rattled in a couple of healthy putts midway through the 9 to establish breathing space.

With just 3 holes in which to salvage a debut point, Pitchmarsh went on the offensive and upped their game as they rattled of 3 birdies to finish with. Unfortunately for them, Choi matched them stroke for stroke on their way to securing the spoils. Though they came out on the wrong side of the result, Pitchmarsh will take a lot from the game as they looked comfortable and produced some fine golf down the stretch. This wasn’t their week, but there is no doubt that they will take some scalps along the way.

Perhaps the biggest scalp in the league is that of the Minster Swingers, who were unlucky not to be playing in the league above this term having failed to meet the strict league regulations on club facilities. Such was there form at the back end of last season, their opposition, I Like Big Putts, declined the invitation of an opening day lesson and duly waved the white flag!

The final debutant in the league came in the form of Aspen Amigos who entertained The Arnie Palmies around the Ocean course. Arnie had clearly put some serious though to the composition of their side as every facet of the game was covered by their players. While each player certainly possesses limited capabilities, the sum of their parts has the potential to be phenomenal. Prime example came in the form of their left-handed putting demon who could put Jordan Spieth to shame on the greens, but while he could shape the ball like Bubba Watson off the tee he had negligible directional control – ruling him out of the early parts of holes.

The scoring in this game may not have been of the standard in the Choi v Pitchmarsh fixture but the tension was palpable. Arnies were always considered to be favourites going into the game, due to their experience, but they looked nervy and had to settle for many a halved hole in par. Aspen threatened to light the blue-touch paper with a birdie on the 12th but were soon distracted by the prospect of more beer.

Arnie did enough to scramble a couple of birdies, and despite a late bogey managed to maintain their composure to close out an opening day victory that will have been greeted with relief at team HQ. They’ll need everything to come together next week as they host WK J Choi in a crucial six pointer.

Much is uncertain about this league but there is much hope of an upset in week two which will help to energise the league and hopefully open the floodgates of beer that have been synonymous with the league down the years.