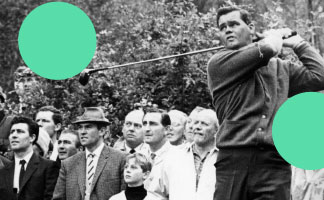 Having seen records tumble in the opening week, expectations were high at the famed Old Palm as some great match-ups beckoned. Week one sensations Wasserman, having shot 10 under on debut showed that they have no superstitions as they swiftly changed their name to The Quarter-Zips before this week’s mouth-watering game against the A-Team.

First up though, were All About the Jazz who were looking to rebound from their bottom smacking last week at the hands of Quarter-Zips, against old rivals Shanks A Lot. The Jazz have built a reputation in recent months for their classy ball-striking, and in particular Big Lewis and his penchant for using a 1-iron. The course appeared as if hand-picked for The Jazz with the par 5’s very much favouring their bold strategy. It was Shanks, however, who came out of the blocks hotter than molten lava as they brushed off an opening half with a brace of well-made birdies to seize the initiative.

Momentum quickly swung back in the favour of The Jazz as they settled into the guts of the course, reeling off a series of birdies. In what seemed like no time at all, The Jazz established a 2 hole lead thanks to four consecutive birdies, each of which accompanied by increasingly energetic fist pumps that Patrick Reed would have been proud of. With the writing on the wall heading down the par 5 17th, it would have been easy for Shanks to lose focus, but thanks to a steady flow of diet Coke, they peaked for a birdie-birdie finish that on other days would have netted them the draw. Sadly for them The Jazz were mentally unflappable as they match the birdies to secure the win and get them right back into the mix for the league.

Some might say that game two was an utterly absorbing contest between two teams at the top of their game, but in all honesty City Swingers and I like Big Putts and I Cannot Lie produced one of the most attritional games of the open era. Such was the standard that pars were greeted with the sort of crowd hysteria that a Sachin Tendulkar hundred against Pakistan might receive in Mumbai. With birdies occurring with the frequency of unicorns, bogeys were traded in even quantities with pars in the early holes.

The Swingers were a shadow of last seasons heroes, but did manage to conjure some sort of form late on as they summoned up a couple of birdies to break the dogged resistance of Putts. The win in the end came with a margin of some comfort, but the manner of it will have set alarm bells ringing in captain Digby’s camp, who may be fearing the worst with The Quarter-Zips next up.

The aforementioned Quarter-Zips remarkably established themselves as a super power in the game with their only performance to date shattering all the records and sending shockwaves throughout the leagues. If ever a side were immune to the intimidation of such a reputation, then it would have been the A-Team – perhaps they would have even relished the encounter before their fall from grace last term. That said, this promised to be a birdie-fest from the get-go …. and it was.

The return to winning ways last week brought back the swagger of old as the A-Team were unruffled by the powerful driving of Quarter-Zips, sticking to relying on their short-game prowess which brought a steady flow of birdies. Through four holes there was nothing between the teams as they were both 3 under the card. In the remaining 5 holes there were only two more pars between the sides as blows were shared evenly. This was a truly absorbing contest that neither side deserved to lose. As with so many of the A-Team’s huge tussles against league rivals in the past, this ended in a creditable draw. Both sides will be happy with the result but A-Team will be wondering how they will close the deficit in holes up, with Quarter-Zips looking like they can birdie any hole out there.

Week 3 can often be so pivotal and with the Quarter-Zips looking so good, City Swingers may well fear the worst if they don’t regain their form of last season. It could spell the end for them and the other teams in league 3.