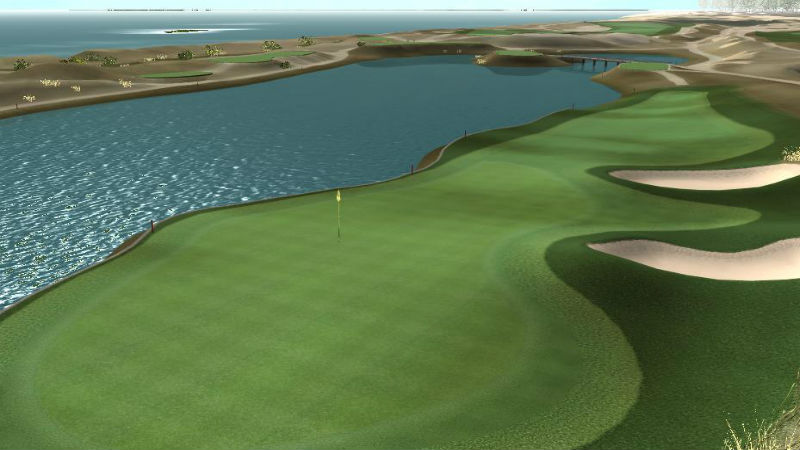 The penultimate week in League 3 is always pivotal, and especially so this time around with such a tight race for the title. The added bonus of an old firm fixture meant that the patrons were in for a real treat at Royal Smithfield. As The Beamers and A-Nother Team were locked in a dead heat, each and every birdie could be crucial toward deciding the outcome of the league.

First to take centre stage were New Zealand’s finest export, The Beamers, taking on Charley Hull’s Unraked Bunker – a side who have tried everything from changing names, selling all their players and putting blindfolded in an attempt to arrest their slide from once feared opponents to the laughing stock of the league. With unlucky Jon returning to the side after a lengthy doping ban, Charley was hopeful of a change of fortune.

As England were toiling against Slovakia on the TV, Charley was instantly distracted and barely noticed The Beamers making birdie at each of the opening 3 holes. Needless to say, this left them 3 holes up and almost across the line, but each hole would be crucial in the race for the title. As the holes slipped by, so the internal arguments in the Hull camp intensified. What started as a drinks order turned into a tirade of insults and at times some extremely hurtful words.

Much like England, Charley were toothless – creating plenty of chances, but unable to convert the best of them. Mad Max’s booming drives apart, Charley was no match for the Beamers – even if they were carrying an uncharacteristically out of sorts Captain Glen (he even subbed himself for the last quarter). The seven birdie haul has helped The Beamers into a commanding position, albeit on hole difference, at the head of the table.

Legend has it that the most feared thing to any golfer is the prospect of facing fully fit Something Els side in Team League. Well, that nightmare became reality this week for Kan’t Putt Mine’s a Gimme who are looking to bounce back from a disappointing run of results since being named the richest club in golf.

With Cageman missing from their roster, it was a big ask for Putt to hold off the advances of a positively frothing Els who started faster than Colin Jackson. Booming drives and intricate wedge shots were the order of the day for Els as they piled up the birdies. When they weren’t knocking it to within gimmie distance they were holing putts from different timezones. Sadly for Gimme the only putting highlight was a birdie putt from 9 feet that all players managed to de-green for a convincing loss.

With Els in irresistible form, they soon got themselves to dormie three and looked odds on to close out the match on the 16th. Kan’t Putt are nothing if not proud, and they were never going to take defeat lying down. By holing a miraculous bunker shot they prolonged the game and moved to the 17th tee with only the slightest glimmer of hope.

The glimmer make a bright beacon when Ryan hit the most perfect of shots into the par 3 17th – straight down the banner and into the cup for the most welcome of holes-in-one. Cue absolute pandemonium on the streets of London as traffic ground to a halt to acknowledge the amazing feat.

Now truly rattled, Els were staring down the barrel of a remarkable comeback. The miracle looked set to be complete as Gimme hit into 10 feet on the final green. Following a disappointing par by Els the stage was clear for the most unlikely of draws to be secured. The de-green earlier in the round was clearly still playing on their minds as all players put tentative strokes on the putts, meaning that Els could breathe a huge sigh of relief as they held on for a hard fought victory.

Far from making up the numbers in round four was the oldest fixture in Team League as arch rivals Golfy McClubface and A-Nother team locked horns for the umpteenth time. Though their names may have changed, the personnel are familiar to all. Even though A-Nother team have experienced greater success in recent times, they still carry bitter memories of the occasion when McClubface defeated them with the final putt in the league finale a little while back.

As many opponents have found, A-Nother team are a tough outfit to breakdown. Golfy thought they had the formula this time around, though, as they reeled off 4 birdies to open proceedings. Slowgier and co were left scratching their heads at this point as they found themselves 1 down.

With birdies not proving good enough to make inroads, Andrew Slowgier turned to the unconventional strategy of complementing his opponent’s hair. Even these tactics could not halt the deluge of birdies, which continued all the way through the 16th. It has to be said that this was one of the most incredible games to watch in the history of the league, as both teams were near faultless.

Inevitably feeling somewhat disgruntled that their birdies were not winning holes, Golfy drew on the spirit of Mark Calcavecchia on the 17th as all 3 players dispatched balls into the murky depths of the lake. Too good an opportunity to pass up, A-Nother Team safely secured the match win by hitting the green.

This was a famous win for A-Nother Team, but the shine was crucially taken off it as Golfy rallied to make birdie to win the final hole. The result was not changed, but in a league that is likely to go down to holes difference, Golfy may gain the satisfaction of denying their arch rivals the title.