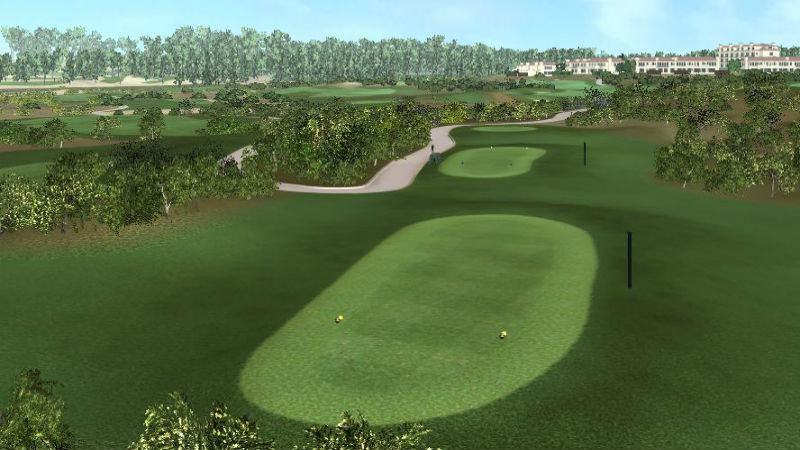 This is the league that sums up the format perfectly, being played after the watershed with no shortage of entertaining banter, eye-opening levels of beer consumption and some spectacular golfing flair. Accordingly the crowds flocked for some tantalising matches.

The opening encounter saw the poster boys of Team Golf, The Beamers all donning their matching outfits entertain new boys Sally Gunnell’s Soldiers. The veterans have successfully managed to re-integrate their want-away captain Glen back into the side and looked to be in perfect harmony. They crushed the hopes of Gunnell’s Soldiers, who actually made a good start, through a combination of massive driving and pin point precision with their irons. Only requiring their putters 7 times in nine holes meant that they posted an amazing 8 birdies, all equating to a 5 hole victory.

Another team being introduced to the fray were The Beer Merchants who had the daunting task of taking on Arnie’s Army. If the level of golfing prowess on show weren’t enough to shake the confidence of the Merchants, then the in-fighting over a portion of chicken goujons would have shaken them to the core.

This episode may explain the performance of The Beer Merchants who never really got going and struggled to find their rhythm against a relentless Arnie’s Army. The Merchants will have better weeks, but Arnie may not!

It wouldn’t have taken a rocket scientist to work out who was involved in the final match of the evening as the shrieks of young girls screaming for their heartthrob “Good Looking Stu” could be heard for miles as he arrived alongside his Shank or be Shanked team mates. Bruin the Hole must have wondered what they were getting involved in as Royal Smithfield looked more like a One Direction gig then a citadel of golf.

The intimidation of the household names of the Shankers Roster – Iceman, Quiet One and Good Looking Stu – was surely worth one hole, which they duly claimed on the first. Bruin fought back gallantly and clawed the game back to level by holing a monster 60 footer on the 13th green. This was an epic tussle that remained even until the final green. With Shankers having to settle for par, they watched on as the newbies held their nerve to drain a snaky 10 foot putt to claim the match and put a marker down in what promises to be an entertaining league.

It seems that Bruin, like their stablemates Kan’t Putt, are going to be a force and may well push The Beamers to their limits in a campaign that seems to have the promise of everything and anything happening.