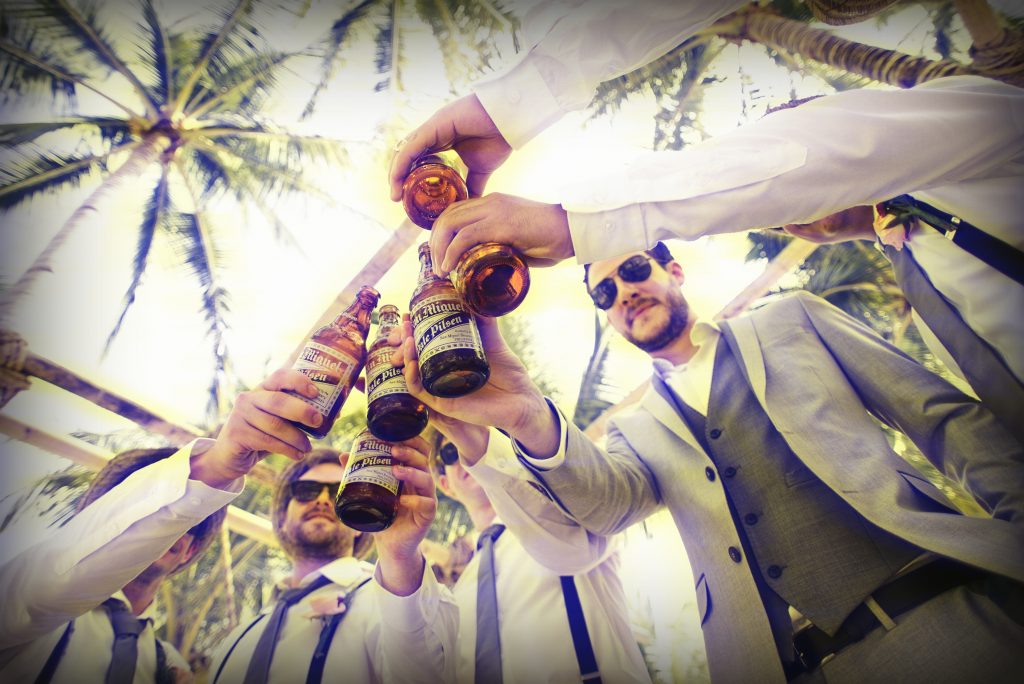 The Beamers, resplendent in team uniform, celebrate another notch in their heavily notched bedpost

Finals night, and the razzmatazz that accompanies it, never fails to stir the emotions, and as news filtered through of the seismic shock in League 3, this night was assured to be special.

While the final is handsomely supported and much celebrated, the purists often like to check in on the contest for 3rd. It can often prove a useful barometer for the chance of the sides for future campaigns, especially when they are rookie sides still adapting to the nuances of team golf.

Having thrown away their chance to be in the final the previous week it would be especially telling to see the performance of The Minster Swingers and how they responded. It has to be said that the atmosphere was entirely devoid of tension as neither side were particularly engaged. In fact, it would be fair to say that they spent more time watching the final than they did their own game!

It seems fitting to leave out the details of what was a fairly turgid affair. Neither side really got going and it was only the fact that Minster managed to snatch the 15th hole that anything bordering on excitement really occurred. Looking like an NFL game, Arnies Palmies changed their entire roster and sent on “special teams” for the final 3 holes to try to salvage something from the game.

They certainly looked “special” as they contrived to lose each of the last 3 holes and handed a hollow victory to Minster Swingers who, while being nowhere near their best, should return next term as contenders with the game to stretch the very best.

On centre court tickets were reportedly being exchanged for as much as £1 more than face value for the meeting of The Beamers and The Fists of Furyk.

The certainties of life have long been established as death, taxes and The Beamers being in every final, so this was to be an Everest moment for the young pretenders. Furyk knew that they might be able to stay with The Beamers for the most part, but needed to hatch a plan to overcome the Kiwi’s extraordinary ability to kill teams of over the last 3 holes.

Both sides started nervously with pars being exchanged over the first couple of holes. The only man with a smile on his face on the whole property was greenkeeper Ken Gubbins whose fairways were untouched in the early stages.

First blood was surprisingly drawn by Furyk as nerves settled and they managed to snatch an unlikely birdie on the notoriously tricky 3rd hole. Of course The Beamers have been down many times before and have rarely been flustered. History was repeated as the New Zealanders made a mockery of the 285 yard par 4 next over water – all 3 players hit the green and they converted the 30 foot putt for eagle that would level the match.

This outstanding eagle lit the blue touch paper, sparking an avalanche of birdies over the next few holes as the sides were locked in a wonderful contest. Risking it all, as they do, The Beamers then took on the par 4 7th with some colossal hitting. As Furyk played the hole tactically for an assured birdie, The Beamers took advantage of their gamble by chipping in from close range for another eagle and the all-important lead.

The match was very much tilting toward The Beamers, and remained in their hands after the penultimate hole was halved. Furyk refused to buckle and produced two fine shots to set-up what looked a likely birdie on the final hole. It appears though that their opposition operate at a different level, as two more lusty blows resulted in another eagle chance. It was as if everything was moving in slow-motion in the final moments. To a man, the expectation was of a closing eagle to secure yet another title.

Of course, they converted their third eagle of the final, but almost more impressive – maybe awe-inspiring – was their expectation that it would happen. They truly are an exceptional side that continue to deliver when it matters most. A side that will undoubtedly take the game forward and should be savoured! Their time will surely come to an end but it looks some way off at the moment.