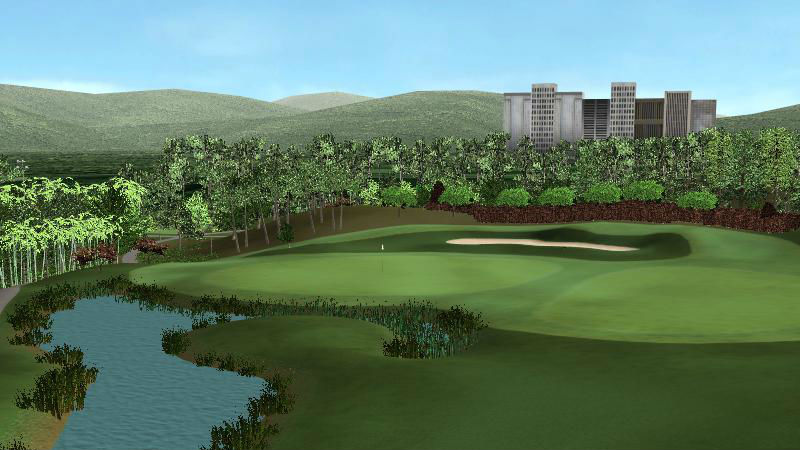 With four giants of the game all in with a shout in League 3, every match is seemingly changing the dynamic of the title race. It may be unfair not to include Golfy McClubface in the elite group of four, but their recent sausage sandwich issues seem to have coincided with a slump in form.

This week they (and their sausage sandwiches) had the opportunity to get back in the conversation by claiming the scalp of Kan’t Putt Mine’s A Gimme in game that just last season they would have fancied winning. Gimme, though, have emerged as a real force in the game after their successful debut last term. Despite last week’s loss, they are still considered the team to beat in this league.

Clearly still affected by their first lost, Gime started nervously with a par, immediately handing the momentum to Andrew Slowgier and co. Looking to press home the advantage, Slowgier adopted an uncharacteristically speedy approach to the game in the hope that he may bamboozle the opposition. Sadly for McClubface, the tactics didn’t work for long as Gimme lit the blue touch paper – carding seven birdies in the last 8 holes. Despite some fine play of their own, McClubface were unable to resist the tide of birdies and were left to bicker between themselves as beers were mixed up and Big Chris Masterton-Smith gave his best impression of Slowgier’s glacier.

Charley Hull’s Unraked Bunker have earned the unfortunate reputation of “the easiest 3 points in Team League history” in their previous guise as Michelle Wie’s Wet Slice and looked to turn the corner (in proper Gerard Houllier style) against A-Nother Team. In their way stood the “birdiest” team in golf – blessed with short games from the heavens and a confidence that would make Floyd Mayweather blush.

Despite a barrage of sub-par figures from A-Nother Team, Charley managed to stay in the game as they turned in one of their best performances yet. The highlight of which was a 330 yard drive followed by a holed pitch for eagle on the 15th. . These heroics weren’t enough to hold off A-Nother team who, holding a 1 hole lead down the last, managed to run down the clock and secure a valuable 3 points against the luckless Charley Hull.

Both The Beamers and Something Els were in desperate need of 3 points in order to stay among the leaders. Arriving later than usual, The Beamers had to forsake their usual warm-up routine and replace it for an express version which actually looked quite painful. Still a little dusty, they overcame their ailing limbs to record birdie on the first, expel some high-pitched whoops and take the lead. Els did throw some birdies back and found reward when The Beamers all erred out-of-bounds on the 13th to hand the initiative back.

This slip-up only seemed to fire-up The Beamers, who birdied the last 5 holes to edge an entertaining game that has all but ended Something Els chances, but keeps The Beamers right in the mix, tied at the top of the table. With two weeks of colossal clashes left the bookies are currently making The Beamers marginal favourites, though it is surely foolish to write off with Kan’t Putt or A-Nother Team.